Tommy Atkins at War As Told in His Own Letters 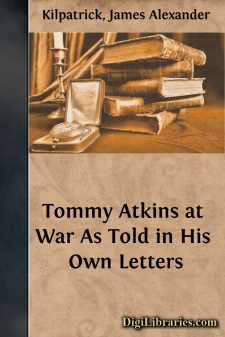 OFF TO THE FRONT

"It is my Royal and Imperial Command that you concentrate your energies, for the immediate present upon one single purpose, and that is that you address all your skill and all the valor of my soldiers to exterminate first the treacherous English and walk over General French's contemptible little army."

While this Imperial Command of the Kaiser was being written, Atkins, innocent of the fate decreed for him, was well on his way to the front, full of exuberant spirits, and singing as he went, "It's a long way to Tipperary." In his pocket was the message from Lord Kitchener which Atkins believes to be the whole duty of a soldier: "Be brave, be kind, courteous (but nothing more than courteous) to women, and look upon looting as a disgraceful act."

Troopship after troopship had crossed the Channel carrying Sir John French's little army to the Continent, while the boasted German fleet, impotent to menace the safety of our transports, lay helpless—bottled up, to quote Mr. Asquith's phrase, "in the inglorious seclusion of their own ports."

Never before had a British Expeditionary Force been organized, equipped and despatched so swiftly for service in the field. The energies of the War Office had long been applied to the creation of a small but highly efficient striking force ready for instant action. And now the time for action had come. The force was ready. From the harbors the troopships steamed away, their decks crowded with cheery soldiers, their flags waving a proud challenge to any disputant of Britain's command of the sea.

The expedition was carried out as if by magic. For a few brief days the nation endured with patience its self-imposed silence. In the newspapers were no brave columns of farewell scenes, no exultant send-off greetings, no stirring pictures of troopships passing out into the night. All was silence, the silence of a nation preparing for the "iron sacrifice," as Kipling calls it, of a devastating war. Then suddenly the silence was broken, and across the Channel was flashed the news that the troops had been safely landed, and were only waiting orders to throw themselves upon the German brigands who had broken the sacred peace of Europe.

And so the scene changes to France and Belgium. Tommy Atkins is on his way to the Front. He has already begun to send home some of those gallant letters that throb throughout the pages of this book. If he felt the absence of the stimulating send-off, necessitated by official caution and the exigencies of a European war, he at least had the new joy of a welcome on foreign soil. It is difficult to find words with the right quality in them to express the feelings aroused in our men by their reception, or the exquisite gratitude felt by the Franco-Belgian people. They welcomed the British troops as their deliverers.

"The first person to meet us in France," writes a British officer, "was the pilot, and the first intimation of his presence was a huge voice in the darkness, which roared out 'A bas Guillaume. Eep, eep, 'ooray!'" As transport after transport sailed into Boulogne, and regiment after regiment landed, the population went into ecstasies of delight. Through the narrow streets of the old town the soldiers marched, singing, whistling, and cheering, with a wave of their caps to the women and a kiss wafted to the children (but not only to the children!) on the route....