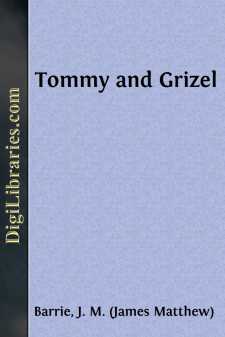 CHAPTER I HOW TOMMY FOUND A WAY

O.P. Pym, the colossal Pym, that vast and rolling figure, who never knew what he was to write about until he dipped grandly, an author in such demand that on the foggy evening which starts our story his publishers have had his boots removed lest he slip thoughtlessly round the corner before his work is done, as was the great man's way—shall we begin with him, or with Tommy, who has just arrived in London, carrying his little box and leading a lady by the hand? It was Pym, as we are about to see, who in the beginning held Tommy up to the public gaze, Pym who first noticed his remarkable indifference to female society, Pym who gave him——But alack! does no one remember Pym for himself? Is the king of the Penny Number already no more than a button that once upon a time kept Tommy's person together? And we are at the night when they first met! Let us hasten into Marylebone before little Tommy arrives and Pym is swallowed like an oyster.

This is the house, 22 Little Owlet Street, Marylebone, but which were his rooms it is less easy to determine, for he was a lodger who flitted placidly from floor to floor according to the state of his finances, carrying his apparel and other belongings in one great armful, and spilling by the way. On this particular evening he was on the second floor front, which had a fireplace in the corner, furniture all his landlady's and mostly horsehair, little to suggest his calling save a noble saucerful of ink, and nothing to draw attention from Pym, who lolled, gross and massive, on a sofa, one leg over the back of it, the other drooping, his arms extended, and his pipe, which he could find nowhere, thrust between the buttons of his waistcoat, an agreeable pipe-rack. He wore a yellow dressing-gown, or could scarcely be said to wear it, for such of it as was not round his neck he had converted into a cushion for his head, which is perhaps the part of him we should have turned to first It was a big round head, the plentiful gray hair in tangles, possibly because in Pym's last flitting the comb had dropped over the banisters; the features were ugly and beyond life-size, yet the forehead had altered little except in colour since the day when he was near being made a fellow of his college; there was sensitiveness left in the thick nose, humour in the eyes, though they so often watered; the face had gone to flabbiness at last, but not without some lines and dents, as if the head had resisted the body for a space before the whole man rolled contentedly downhill.

He had no beard. "Young man, let your beard grow." Those who have forgotten all else about Pym may recall him in these words. They were his one counsel to literary aspirants, who, according as they took it, are now bearded and prosperous or shaven and on the rates. To shave costs threepence, another threepence for loss of time—nearly ten pounds a year, three hundred pounds since Pym's chin first bristled. With his beard he could have bought an annuity or a cottage in the country, he could have had a wife and children, and driven his dog-cart, and been made a church-warden....