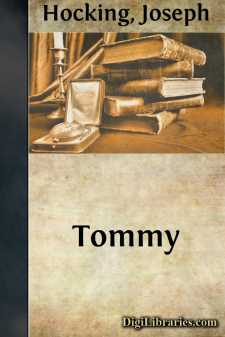 The Brunford Town Hall clock was just chiming half-past three as Tom Pollard left his home in Dixon Street and made his way towards the Thorn and Thistle public-house. It was not Tom's intention to stay long at the Thorn and Thistle, as he had other plans in view, nevertheless something drew him there. He crossed the tram lines in St. George's Street, and, having stopped to exchange some rustic jokes with some lads who stood at the corner of the street, he hurried across the open space and quickly stood on the doorsteps of the public-house.

The weather was gloriously fine, and for a wonder the air in the heart of the town was pure and clear. That was accounted for by the fact that it was Sunday, and the mills were idle. Throughout the week-days, both in summer and in winter, the atmosphere of Brunford is smoke laden, while from a hundred mills steamy vapours are emitted which makes that big manufacturing town anything but a health resort. Tom was making his way up the passage towards the bar, when the door opened and a buxom, bold-eyed, red-cheeked girl of about twenty-four stopped him.

"I was thinking you weren't coming at all. Some young men I know of wouldn't have been late if I'd said to them what I said to you on Friday night." Then she looked at him archly.

"I couldn't get away before," replied Tom. Evidently he was not quite comfortable, and he did not return the girl's glances with the warmth she desired.

"Anyhow I am free till half-past five," she went on. "I don't know what father and mother would say if they knew I was walking out with you; but I don't mind. Do you like my new dress, Tom?"

Tom looked at her admiringly; there was no doubt that, after her own order, she was a striking-looking girl, and her highly coloured attire was quite in accord with her complexion.

"Jim Scott was here half an hour ago," she went on; "he badly wanted me to go with him, but I wouldn't."

Tom looked more uncomfortable than ever; he remembered the purpose for which he had set out, and was sorry that he had called at the Thorn and Thistle at all, even although the girl evidently favoured him more than any of her other admirers.

"I just called to say I couldn't come for a walk with you this afternoon," he said, looking on the ground. "You see I have an appointment."

"Appointment!" cried the girl. "Who with?"

"Oh, with no one in particular; only I must keep it."

The girl's eyes flashed angrily. "Look here," she cried, "you are still sweet on Alice Lister; I thought you had given up all that Sunday-school lot."

"Well, I have noan been to Sunday School," said Tom.

"Ay, but you're going to meet Alice Lister now, and that is why you can't go wi' me." Evidently the girl was very angry, and a look of jealousy flashed from her eyes. Still there could be no doubt that she was very fond of Tom and meant if possible to capture him.

For a moment the girl seemed on the point of speaking to him still more angrily, and perhaps of bidding him to leave her for good....