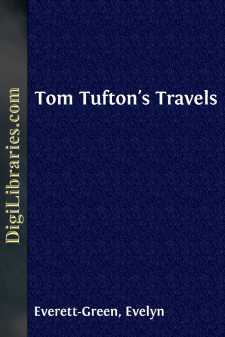 CHAPTER I. AN ONLY SON.

Good Squire Tufton of Gablehurst lay dying. He had been ailing for many months, knowing his end to be near; and yet, as is so often the case in lingering declines, death was long in coming, so that those about him had grown used to the sight of the strong figure wasted to a shadow, and the face shadowed by the wings of the hovering messenger.

Some members of the household, indeed, had begun to cherish the hope that the master might yet recover, and be seen amongst them once more; but that hope was not shared by the patient himself, nor by the two devoted women who nursed him with tender love.

His wife and daughter were always with him, relieving each other in turn, and occasionally both yielding place to one of the many faithful servants, who were all eager to do what they could for the master they loved; but in his waking hours the squire seldom missed the best-loved faces about him. Rachel and her mother seemed to live their lives about his sick bed, soothing his weariness and pain, and striving with patient resignation to school themselves to submission to the will of God, who was about to take their loved one from them.

And yet they had kept him with them longer than once seemed possible. The bright days of summer were doubtless favourable to the patient. When he could lie with open windows, breathing the pure soft air from woodland and field, he seemed able to make a stand against the grim enemy of human nature. But the summer was now upon the wane; the golden sunshine was obscured by the first driving rains of the approaching equinox; and it seemed to those who watched at the sufferer's bedside that his life was ebbing away as slowly and as steadily as the hours of sunshine in the shortening day.

Today there was a look upon his face which caused Rachel many times to turn anxious and beseeching eyes upon her mother, and yet what she read in the expression of that worn and gentle countenance only confirmed her own impressions.

The Squire lay very still and quiet, dozing as it seemed, whilst the fire crackled cheerfully up the wide chimney, and the rain dashed ceaselessly against the windows. He had not spoken for many hours. There had come into Rachel's heart a terrible fear lest he should never speak again. The shadow on his face looked so gray; the features had taken so strange and pinched a look.

Rachel had seen death before in many humble homes, although it had, so far, not touched any of her own nearest and dearest. She had watched that creeping shadow before now, for her heart always went out to the sick and the suffering, and her feet led her to the homes of those who stood in need of tender sympathy and womanly aid. But when the shadow gathered upon the face of her own loved father, the pressure upon her heart seemed almost more than she could bear. The tears stole down her cheeks, and her eyes sought those of her mother with a glance of almost pitiful appeal.

The leech had stolen into the room, had stood beside the patient, had shaken his head, and stolen away....