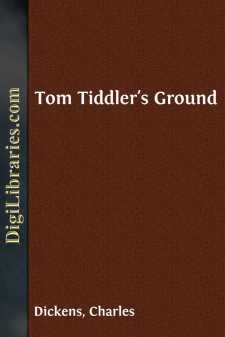 CHAPTER I—PICKING UP SOOT AND CINDERS

“And why Tom Tiddler’s ground?” said the Traveller.

“Because he scatters halfpence to Tramps and such-like,” returned the Landlord, “and of course they pick ’em up.  And this being done on his own land (which it is his own land, you observe, and were his family’s before him), why it is but regarding the halfpence as gold and silver, and turning the ownership of the property a bit round your finger, and there you have the name of the children’s game complete.  And it’s appropriate too,” said the Landlord, with his favourite action of stooping a little, to look across the table out of window at vacancy, under the window-blind which was half drawn down.  “Leastwise it has been so considered by many gentlemen which have partook of chops and tea in the present humble parlour.”

The Traveller was partaking of chops and tea in the present humble parlour, and the Landlord’s shot was fired obliquely at him.

“And you call him a Hermit?” said the Traveller.

“They call him such,” returned the Landlord, evading personal responsibility; “he is in general so considered.”

“What is a Hermit?” asked the Traveller.

“What is it?” repeated the Landlord, drawing his hand across his chin.

The Landlord stooped again, to get a more comprehensive view of vacancy under the window-blind, and—with an asphyxiated appearance on him as one unaccustomed to definition—made no answer.

“I’ll tell you what I suppose it to be,” said the Traveller.  “An abominably dirty thing.”

“Mr. Mopes is dirty, it cannot be denied,” said the Landlord.

“Mr. Mopes is vain of the life he leads, some do say,” replied the Landlord, as another concession.

“A slothful, unsavoury, nasty reversal of the laws of human mature,” said the Traveller; “and for the sake of GOD’S working world and its wholesomeness, both moral and physical, I would put the thing on the treadmill (if I had my way) wherever I found it; whether on a pillar, or in a hole; whether on Tom Tiddler’s ground, or the Pope of Rome’s ground, or a Hindoo fakeer’s ground, or any other ground.”

“I don’t know about putting Mr. Mopes on the treadmill,” said the Landlord, shaking his head very seriously.  “There ain’t a doubt but what he has got landed property.”

“How far may it be to this said Tom Tiddler’s ground?” asked the Traveller.

“Put it at five mile,” returned the Landlord.

“Well!  When I have done my breakfast,” said the Traveller, “I’ll go there.  I came over here this morning, to find it out and see it.”

“Many does,” observed the Landlord.

The conversation passed, in the Midsummer weather of no remote year of grace, down among the pleasant dales and trout-streams of a green English county.  No matter what county.  Enough that you may hunt there, shoot there, fish there, traverse long grass-grown Roman roads there, open ancient barrows there, see many a square mile of richly cultivated land there, and hold Arcadian talk with a bold peasantry, their country’s pride, who will tell you (if you want to know) how pastoral housekeeping is done on nine shillings a week....