Tom Swift in the Land of Wonders, or, the Underground Search for the Idol of Gold 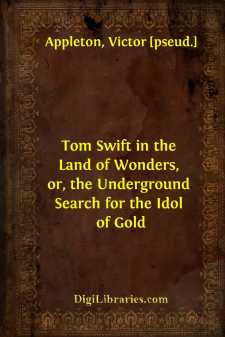 CHAPTER I A WONDERFUL STORY

Tom Swift, who had been slowly looking through the pages of a magazine, in the contents of which he seemed to be deeply interested, turned the final folio, ruffled the sheets back again to look at a certain map and drawing, and then, slapping the book down on a table before him, with a noise not unlike that of a shot, exclaimed:

"Well, that is certainly one wonderful story!"

"What's it about, Tom?" asked his chum, Ned Newton. "Something about inside baseball, or a new submarine that can be converted into an airship on short notice?"

"Neither one, you—you unscientific heathen," answered Tom, with a laugh at Ned. "Though that isn't saying such a machine couldn't be invented."

"I believe you—that is if you got on its trail," returned Ned, and there was warm admiration in his voice.

"As for inside baseball, or outside, for that matter, I hardly believe I'd be able to tell third base from the second base, it's so long since I went to a game," proceeded Tom. "I've been too busy on that new airship stabilizer dad gave me an idea for. I've been working too hard, that's a fact. I need a vacation, and maybe a good baseball game——"

He stopped and looked at the magazine he had so hastily slapped down. Something he had read in it seemed to fascinate him.

"I wonder if it can possibly be true," he went on. "It sounds like the wildest dream of a professional sleep-walker; and yet, when I stop to think, it isn't much worse than some of the things we've gone through with, Ned."

"Say, for the love of rice-pudding! will you get down to brass tacks and strike a trial balance? What are you talking of, anyhow? Is it a joke?"

"Yes. What you just read in that magazine which seems to cause you so much excitement."

"Well, it may be a joke; and yet the professor seems very much in earnest about it," replied Tom. "It certainly is one wonderful story!"

"So you said before. Come on—the 'fillium' is busted. Splice it, or else put in a new reel and on with the show. I'd like to know what's doing. What professor are you talking of?"

"Swyington Bumper?" and Ned's voice showed that his memory was a bit hazy.

"Yes. You ought to remember him. He was on the steamer when I went down to Peru to help the Titus Brothers dig the big tunnel. That plotter Waddington, or some of his tools, dropped a bomb where it might have done us some injury, but Professor Bumper, who was a fellow passenger, on his way to South America to look for the lost city of Pelone, calmly picked up the bomb, plucked out the fuse, and saved us from bad injuries, if not death. And he was as cool about it as an ice-cream cone. Surely you remember!"

"Swyington Bumper! Oh, yes, now I remember him," said Ned Newton. "But what has he got to do with a wonderful story? Has he written more about the lost city of Pelone? If he has I don't see anything so very wonderful in that."

"There isn't," agreed Tom. "But this isn't that," and Tom picked up the magazine and leafed it to find the article he had been reading....