Tom Swift in Captivity, or a Daring Escape By Airship 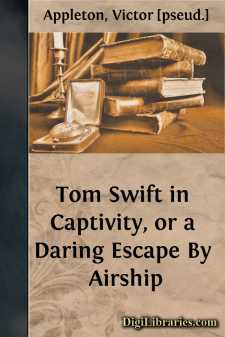 Chapter I A Strange Request

Tom Swift closed the book of adventures he had been reading, tossed it on the table, and got up. Then he yawned.

"What's the matter?" asked his chum, Ned Newton, who was deep in another volume.

"Oh, I thought this was going to be something exciting," replied Tom, motioning toward the book he had discarded. "But say! the make-believe adventures that fellow had, weren't anything compared to those we went through in the city of gold, or while rescuing the exiles of Siberia."

"Well," remarked Ned, "they would have to be pretty classy adventures to lay over those you and I have had lately. But where are you going?" he continued, for Tom had taken his cap and started for the door.

"I thought I'd go out and take a little run in the aeroplane. Want to come along? It's more fun than sitting in the house reading about exciting things that never have happened. Come on out and--"

"Yes, and have a tumble from the aeroplane, I suppose you were going to say," interrupted Ned with a laugh. "Not much! I'm going to stay here and finish this book."

"Say," demanded Tom indignantly. "Did you ever know me to have a tumble since I knew how to run an airship?"

"Then you carried the joke too far, as the policeman said to the man he found lugging off money from the bank. And to make up for it you've got to come along with me."

"Where are you going?"

"Oh, anywhere. Just to take a little run in the upper regions, and clear some of the cobwebs out of my head. I declare, I guess I've got the spring fever. I haven't done anything since we got back from Russia last fall, and I'm getting rusty."

"You haven't done anything!" exclaimed Ned, following his chum's example by tossing aside the book. "Do you call working on your new invention of a noiseless airship nothing?"

"Well, I haven't finished that yet. I'm tired of inventing things. I just want to go off, and have some good fun, like getting shipwrecked on a desert island, or being lost in the mountains, or something like that. I want action. I want to get off in the jungle, and fight wild beasts, and escape from the savages!"

"Then come on out and take a run, and maybe we'll get on the track of an adventure," urged the young inventor. "We won't go far, just twenty or thirty miles or so."

The two youths emerged from the house and started across the big lawn toward the aeroplane sheds, for Tom Swift owned several speedy aircrafts, from a big combined aeroplane and dirigible balloon, to a little monoplane not much larger than a big bird, but which was the most rapid flier that ever breathed the fumes of gasolene.

"Which one you going to take, Tom?" asked Ned, as his chum paused in front of the row of hangars.

"Oh, the little double-seated monoplane, I guess that's in good shape, and it's easy to manage. When I'm out for fun I hate to be tinkering with levers and warping wing tips all the while. The Lark practically flies herself, and we can sit back and take it easy....