Tom Swift and His Motor-Cycle, or, Fun and Adventures on the Road 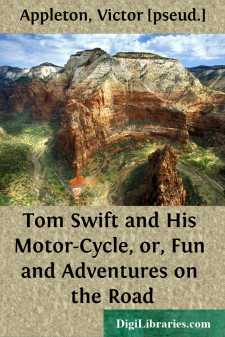 Chapter I A Narrow Escape

"That's the way to do it! Whoop her up, Andy! Shove the spark lever over, and turn on more gasolene! We'll make a record this trip."

Two lads in the tonneau of a touring car, that was whirling along a country road, leaned forward to speak to the one at the steering wheel. The latter was a red-haired youth, with somewhat squinty eyes, and not a very pleasant face, but his companions seemed to regard him with much favor. Perhaps it was because they were riding in his automobile.

"Whoop her up, Andy!" added the lad on the seat beside the driver. "This is immense!"

"I rather thought you'd like it," remarked Andy Foger, as he turned the car to avoid a stone in the road. "I'll make things hum around Shopton!"

"You have made them hum already, Andy," commented the lad beside him. "My ears are ringing. Wow! There goes my cap!"

As the boy spoke, the breeze, created by the speed at which the car was traveling, lifted off his cap, and sent it whirling to the rear.

Andy Foger turned for an instant's glance behind. Then he opened the throttle still wider, and exclaimed:

"Let it go, Sam. We can get another. I want to see what time I can make to Mansburg! I want to break a record, if I can."

"Look out, or you'll break something else!" cried a lad on the rear seat. "There's a fellow on a bicycle just ahead of us. Take care, Andy!"

"Let him look out for himself," retorted Foger, as he bent lower over the steering wheel, for the car was now going at a terrific rate. The youth on the bicycle was riding slowly along, and did not see the approaching automobile until it was nearly upon him. Then, with a mean grin, Andy Foger pressed the rubber bulb of the horn with sudden energy, sending out a series of alarming blasts.

"It's Tom Swift!" cried Sam Snedecker. "Look out, or you'll run him down!"

"Let him keep out of my way," retorted Andy savagely.

The youth on the wheel, with a sudden spurt of speed, tried to cross the highway. He did manage to do it, but by such a narrow margin that in very terror Andy Foger shut off the power, jammed down the brakes and steered to one side. So suddenly was he obliged to swerve over that the ponderous machine skidded and went into the ditch at the side of the road, where it brought up, tilting to one side.

Tom Swift, his face rather pale from his narrow escape, leaped from his bicycle, and stood regarding the automobile. As for the occupants of that machine, from Andy Foger, the owner, to the three cronies who were riding with him, they all looked very much astonished.

"Are we--is it damaged any, Andy?" asked Sam Snedecker.

He leaped from his seat and made a hurried inspection of the machine. He found nothing the matter, though it was more from good luck than good management. Then Andy turned and looked savagely at Tom Swift. The latter, standing his wheel up against the fence, walked forward.

"What do you mean by getting in the way like that?" demanded Andy with a scowl....