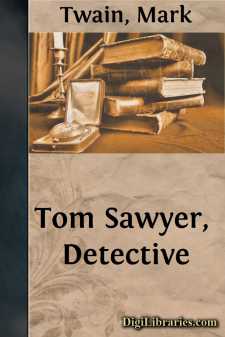 CHAPTER I. AN INVITATION FOR TOM AND HUCK [Note: Strange as the incidents of this story are, theyare not inventions, but facts—even to the public confessionof the accused. I take them from an old-time Swedishcriminal trial, change the actors, and transfer the scenesto America. I have added some details, but only a couple ofthem are important ones. — M. T.]

WELL, it was the next spring after me and Tom Sawyer set our old nigger Jim free, the time he was chained up for a runaway slave down there on Tom's uncle Silas's farm in Arkansaw. The frost was working out of the ground, and out of the air, too, and it was getting closer and closer onto barefoot time every day; and next it would be marble time, and next mumbletypeg, and next tops and hoops, and next kites, and then right away it would be summer and going in a-swimming. It just makes a boy homesick to look ahead like that and see how far off summer is. Yes, and it sets him to sighing and saddening around, and there's something the matter with him, he don't know what. But anyway, he gets out by himself and mopes and thinks; and mostly he hunts for a lonesome place high up on the hill in the edge of the woods, and sets there and looks away off on the big Mississippi down there a-reaching miles and miles around the points where the timber looks smoky and dim it's so far off and still, and everything's so solemn it seems like everybody you've loved is dead and gone, and you 'most wish you was dead and gone too, and done with it all.

Don't you know what that is? It's spring fever. That is what the name of it is. And when you've got it, you want—oh, you don't quite know what it is you DO want, but it just fairly makes your heart ache, you want it so! It seems to you that mainly what you want is to get away; get away from the same old tedious things you're so used to seeing and so tired of, and set something new. That is the idea; you want to go and be a wanderer; you want to go wandering far away to strange countries where everything is mysterious and wonderful and romantic. And if you can't do that, you'll put up with considerable less; you'll go anywhere you CAN go, just so as to get away, and be thankful of the chance, too.

Well, me and Tom Sawyer had the spring fever, and had it bad, too; but it warn't any use to think about Tom trying to get away, because, as he said, his Aunt Polly wouldn't let him quit school and go traipsing off somers wasting time; so we was pretty blue. We was setting on the front steps one day about sundown talking this way, when out comes his aunt Polly with a letter in her hand and says:

"Tom, I reckon you've got to pack up and go down to Arkansaw—your aunt Sally wants you."

I 'most jumped out of my skin for joy. I reckoned Tom would fly at his aunt and hug her head off; but if you believe me he set there like a rock, and never said a word. It made me fit to cry to see him act so foolish, with such a noble chance as this opening up. Why, we might lose it if he didn't speak up and show he was thankful and grateful....