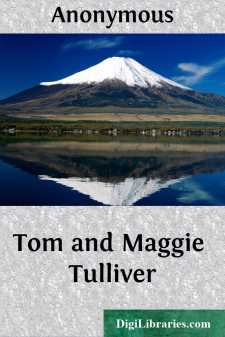 Chapter I. TOM MUST GO TO SCHOOL.

"What I want, you know," said Mr. Tulliver of Dorlcote Mill—"what I want is to give Tom a good eddication. That was what I was thinking of when I gave notice for him to leave th' academy at Lady Day. I meant to put him to a downright good school at Midsummer.

"The two years at th' academy 'ud ha' done well enough," the miller went on, "if I'd meant to make a miller and farmer of him like myself. But I should like Tom to be a bit of a scholard, so as he might be up to the tricks o' these fellows as talk fine and write with a flourish. It 'ud be a help to me wi' these lawsuits and things."

Mr. Tulliver was speaking to his wife, a blond, comely woman in a fan-shaped cap.

"Well, Mr. Tulliver," said she, "you know best. But hadn't I better kill a couple o' fowl, and have th' aunts and uncles to dinner next week, so as you may hear what Sister Glegg and Sister Pullet have got to say about it? There's a couple o' fowl wants killing!"

"You may kill every fowl i' the yard if you like, Bessy, but I shall ask neither aunt nor uncle what I'm to do wi' my own lad," said Mr. Tulliver.

"Dear heart!" said Mrs. Tulliver, "how can you talk so, Mr. Tulliver? However, if Tom's to go to a new school, I should like him to go where I can wash him and mend him; else he might as well have calico as linen, for they'd be one as yallow as th' other before they'd been washed half a dozen times. And then, when the box is goin' backards and forrards, I could send the lad a cake, or a pork-pie, or an apple."

"Well, well, we won't send him out o' reach o' the carrier's cart, if other things fit in," said Mr. Tulliver. "But you mustn't put a spoke i' the wheel about the washin' if we can't get a school near enough. But it's an uncommon puzzling thing to know what school to pick."

Mr. Tulliver paused a minute or two, and dived with both hands into his pockets, as if he hoped to find some idea there. Then he said, "I know what I'll do, I'll talk it over wi' Riley. He's coming to-morrow."

"Well, Mr. Tulliver, I've put the sheets out for the best bed, and Kezia's got 'em hanging at the fire. They aren't the best sheets, but they're good enough for anybody to sleep in, be he who he will."

As Mrs. Tulliver spoke she drew a bright bunch of keys from her pocket, and singled out one, rubbing her thumb and finger up and down it with a placid smile while she looked at the clear fire.

"I think I've hit it, Bessy," said Mr. Tulliver, after a short silence. "Riley's as likely a man as any to know o' some school; he's had schooling himself, an' goes about to all sorts o' places—auctioneering and vallyin' and that. I want Tom to be such a sort o' man as Riley, you know—as can talk pretty nigh as well as if it was all wrote out for him, and a good solid knowledge o' business too."

"Well," said Mrs. Tulliver, "so far as talking proper, and knowing everything, and walking with a bend in his back, and setting his hair up, I shouldn't mind the lad being brought up to that....