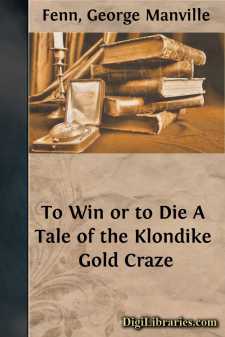 The speaker half whispered that, and then he shouted, “Do you hear?”

There was a pause, and then from the face of a huge white snow-cliff there came back the word “hear.”

“Thankye; that’s quite cheering; anything’s better than that horrible silence. What do they say? When a man gets in the habit of talking to himself it’s a sign that he is going mad? Once more, it’s a lie! A man would go mad in this awful solitude if he didn’t hear some one speaking. Snow, snow, snow, and rock and mountain; and ugh! how cold! Pull up, donkey! jackass! idiot! or you’ll freeze to death.”

The speaker was harnessed by a looped rope to a small, well-packed sledge, after the fashion of one who tracks about along the Thames; but how different here! No sunny river, no verdant flowing mead or hanging summer wood, but winter, stern winter in its wildest, and the heavy sledge, in answer to the tugging at the rope, now sticking fast amongst the heaped-up stones frozen together in a mass, now suddenly gliding down sharp slopes and tripping its owner up, so that again and again, during an awful day’s tramp, he had fallen heavily. But only to struggle up, shake the snow from his fur-lined coat, and continue his journey onward towards the golden land where the nuggets lay in wondrous profusion waiting the bold adventurer’s coming—heaped-up, almost fabulous riches that had lain undiscovered since the beginning of the world.

He, the toiler, dragging that sledge, in which were carefully packed his gun, ammunition, spare clothes, blankets, stores, and sleeping-bag of fur, had started at daylight that morning from the last outpost of civilisation—a miserable shanty at the top of the tremendous pass he had surmounted with the help of the men who occupied the shanty and called themselves guides; and then, after repacking his sledge and trusting to the landmarks ahead and a pocket compass, he had boldly set off, ready to dare every peril, for he was young, sanguine, well-armed, strong, and nerved by hope and the determination to succeed.

It was only a brave struggle over the mountains, and then down into the river valley beyond, to leave the winter behind with its pain and misery, and meet the welcome of the summer sunshine and—the gold.

That morning it was winter indeed; but the adventurer’s heart was warm, and the way through the mountains was plain, while the exertion sent the blood tingling through his veins till he glowed as the rugged miles were mastered.

Then there was the halt and a seat on the sledge for a hasty meal upon the tough provisions; but how delicious every mouthful was!

Then forward again, refreshed for the journey onward, to some snugly sheltered spot where he could camp for the night and sleep in his fur bag, regardless of any number of degrees of frost.

But as the afternoon wore on, the sledge seemed to grow more heavy, the way wilder and more stern, and the stoppages frequent....