To the Gold Coast for Gold A Personal Narrative in Two Volumes.-Volume I 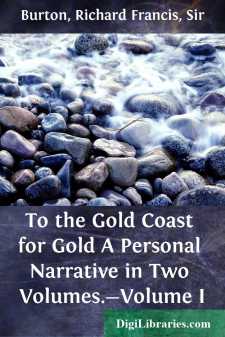 CHAPTER I. PRELIMINARY: TRIESTE TO LISBON.

The glory of an explorer, I need hardly say, results not so much from the extent, or the marvels of his explorations, as from the consequences to which they lead. Judged by this test, my little list of discoveries has not been unfavoured of fortune. Where two purblind fever-stricken men plodded painfully through fetid swamp and fiery thorn-bush over the Zanzibar-Tanganyika track, mission-houses and schools may now be numbered by the dozen. Missionaries bring consuls, and consuls bring commerce and colonisation. On the Gold Coast of Western Africa, whence came the good old 'guinea,' not a washing-cradle, not a pound of quicksilver was to be found in 1862; in 1882 five mining companies are at work; and in 1892 there will be as many score.

I had long and curiously watched from afar the movement of the Golden Land, our long-neglected El Dorado, before the opportunity of a revisit presented itself. At last, in the autumn of 1881, Mr. James Irvine, of Liverpool, formerly of the West African 'Oil-rivers,' and now a large mine-owner in the Gulf of Guinea, proposed to me a tour with the object of inspecting his concessions, and I proposed to myself a journey of exploration inland. The Foreign Office liberally gave me leave to escape the winter of Trieste, where the ferocious Bora (nor'-nor'-easter) wages eternal war with the depressing and distressing Scirocco, or south-easter. Some One marvelled aloud and said, 'You are certainly the first that ever applied to seek health in the "genial and congenial climate" of the West African Coast.' But then Some One had not realised the horrors of January and February at the storm-beaten head of the ever unquiet Adriatic.

Thus it happened that on November 18,1881, after many adieux and au revoirs, I found myself on board the Cunard s.s. Demerara (Captain C. Jones), bound for 'Gib.' My wife was to accompany me as far as Hungarian Fiume.

The Cunard route to 'Gib' is decidedly roundabout. We began with a run to Venice, usually six hours from the Vice-Queen of the Adriatic: it was prolonged to double by the thick and clinging mist-fog. The sea-city was enjoying her usual lethargy of repose after the excitement of the 'geographical Carnival,' as we called the farcical Congress of last September. She is essentially a summering place. Her winter is miserable, neither city nor houses being built for any but the finest of fine weather; her 'society'-season lasts only four months from St. Stephen's Day; her traveller-seasons are spring and autumn. We found all our friends either in bed with bad colds, or on the wing for England and elsewhere; we inhaled a quant. suff. of choking vapour, even in the comfortable Britannia Hotel; and, on the morning of the 23rd, we awoke to find ourselves moored alongside of the new warehouses on the new port of Hungarian, or rather Croatian, Fiume.

Fiume had made prodigious strides since I last saw her in 1878; and she is gradually taking the wind out of the sails of her sister-rival....