To Him That Hath: a Tale of the West of Today 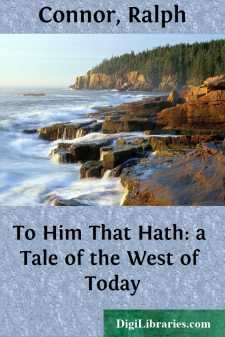 CHAPTER I THE GAME

A ripple of cheers ran round the court, followed by a buzz of excited conversation.

The young men smiled at each other and at their friends on the side lines and proceeded to change courts for the next set, pausing for refreshments on the way.

"Much too lazy, Captain Jack. I am quite out of patience with you," cried a young girl whose brown eyes were dancing with mock indignation.

Captain Jack turned with a slightly bored look on his thin dark face.

"Too lazy, Frances?" drawled he. "I believe you. But think of the temperature."

"You have humiliated me dreadfully," she said severely.

"Humiliated you? You shock me. But how, pray?" Captain Jack's eyes opened wide.

"You, a Canadian, and our best player—at least, you used to be—to allow yourself to be beaten by a—a—" she glanced at his opponent with a defiant smile—"a foreigner."

"A foreigner?" exclaimed Captain Jack. "Better not let Adrien hear you." He turned toward a tall fair girl standing near.

"Well, he's not a Canadian, I mean," said Frances, sticking to her guns. "Besides, I can't stand Adrien crowing over me. She is already far too English, don-che-know. You have given her one more occasion for triumph over us Colonials."

"Ah, this is serious," said Captain Jack. "But really it is too hot you know for—what shall I say?—International complications."

"Jack, you are plain lazy," said Frances. "You know you are. You don't deserve to win, but if you really would put your back into it—"

"Oh, come, Frances. Why! You don't know that my cousin played for his College at Oxford. And that is saying something," said Adrien.

"There you are, Jack! That's the sort of thing I have to live with," said Frances. "She thinks that settles everything."

"Well, doesn't it rather?" smiled Adrien.

"Oh, Jack, if you have any regard for your country, not to say my unworthy self, won't you humble her?" implored Frances. "If you would only buck up!"

"He will need to, eh, Adrien?" said a young fellow standing near, slowly sipping his drink.

"I think so. Indeed, I am quite sure of it," coolly replied the girl addressed. "But I really think it is quite useless."

"Really, old chap, I feel I must beat you this set," said Captain Jack to the young Englishman. "My country's credit as well as my own is at stake, you see."

"Both are fairly assured, I should say," said the Englishman.

"Not to-day," said Stillwell, with a suspicion of a polite sneer in his voice. "My money says so."

"Canada vs. the Old Country!" cried a voice from the company.

"You have no mercy, Miss Frances, I see," said the Englishman, looking straight into her eyes.

"Absolutely none," she replied, smiling saucily at him.

"Vae victis, eh, old chap?" said Sidney, as they sauntered off together to their respective courts....