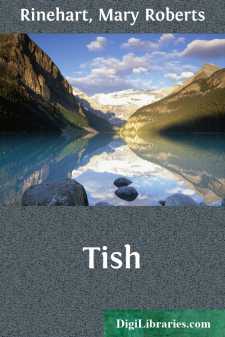 So many unkind things have been said of the affair at Morris Valley that I think it best to publish a straightforward account of everything. The ill nature of the cartoon, for instance, which showed Tish in a pair of khaki trousers on her back under a racing-car was quite uncalled for. Tish did not wear the khaki trousers; she merely took them along in case of emergency. Nor was it true that Tish took Aggie along as a mechanician and brutally pushed her off the car because she was not pumping enough oil. The fact was that Aggie sneezed on a curve and fell out of the car, and would no doubt have been killed had she not been thrown into a pile of sand.

It was in early September that Eliza Bailey, my cousin, decided to go to London, ostensibly for a rest, but really to get some cretonne at Liberty's. Eliza wrote me at Lake Penzance asking me to go to Morris Valley and look after Bettina.

I must confess that I was eager to do it. We three were very comfortable at Mat Cottage, "Mat" being the name Charlie Sands, Tish's nephew, had given it, being the initials of "Middle-Aged Trio." Not that I regard the late forties as middle-aged. But Tish, of course, is fifty. Charlie Sands, who is on a newspaper, calls us either the "M.A.T." or the "B.A.'s," for "Beloved Aunts," although Aggie and I are not related to him.

Not that she will allow you to do it, or because she isn't entirely able to take care of herself; but because the people here are a talky lot. Bettina will probably look after you. She has come from college with a feeling that I am old and decrepit and must be cared for. She maddens me with pillows and cups of tea and woolen shawls. She thinks Morris Valley selfish and idle, and is disappointed in the church, preferring her Presbyterianism pure. She is desirous now of learning how to cook. If you decide to come I'll be grateful if you can keep her out of the kitchen.

P.S. If you can keep Bettina from getting married while I'm away I'll be very glad. She believes a woman should marry and rear a large family!

We were sitting on the porch of the cottage at Lake Penzance when I received the letter, and I read it aloud. "Humph!" said Tish, putting down the stocking she was knitting and looking over her spectacles at me—"Likes her Presbyterianism pure and believes in a large family! How old is she? Forty?"

"Eighteen or twenty," I replied, looking at the letter. "I'm not anxious to go. She'll probably find me frivolous."

Tish put on her spectacles and took the letter. "I think it's your duty, Lizzie," she said when she'd read it through. "But that young woman needs handling. We'd better all go. We can motor over in half a day."

That was how it happened that Bettina Bailey, sitting on Eliza Bailey's front piazza, decked out in chintz cushions,—the piazza, of course,—saw a dusty machine come up the drive and stop with a flourish at the steps. And from it alight, not one chaperon, but three.

After her first gasp Bettina was game. She was a pretty girl in a white dress and bore no traces in her face of any stern religious proclivities.

"I didn't know—" she said, staring from one to the other of us. "Mother said—that is—won't you go right upstairs and have some tea and lie down?" She had hardly taken her eyes from Tish, who had lifted the engine hood and was poking at the carbureter with a hairpin.

"No, thanks," said Tish briskly. "I'll just go around to the garage and oil up while I'm dirty. I've got a short circuit somewhere. Aggie, you and Lizzie get the trunk off."

Bettina stood by while we unbuckled and lifted down our traveling trunk. She did not speak a word, beyond asking if we wouldn't wait until the gardener came....