Timothy's Quest A Story for Anybody, Young or Old, Who Cares to Read It 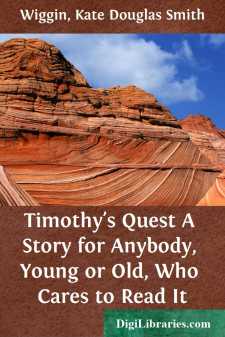 Minerva Court! Veil thy face, O Goddess of Wisdom, for never, surely, was thy fair name so ill bestowed as when it was applied to this most dreary place!

It was a little less than street, a little more than alley, and its only possible claim to decency came from comparison with the busier thoroughfare out of which it opened. This was so much fouler, with its dirt and noise, its stands of refuse fruit and vegetables, its dingy shops and all the miserable traffic that the place engendered, its rickety doorways blocked with lounging men, its Blowsabellas leaning on the window-sills, that the Court seemed by contrast a most desirable and retired place of residence.

But it was a dismal spot, nevertheless, with not even an air of faded gentility to recommend it. It seemed to have no better days behind it, nor to hold within itself the possibility of any future improvement. It was narrow, and extended only the length of a city block, yet it was by no means wanting in many of those luxuries which mark this era of modern civilization. There were groceries, with commodious sample-rooms attached, at each corner, and a small saloon, called "The Dearest Spot" (which it undoubtedly was in more senses than one), in the basement of a house at the farther end. It was necessary, however, for the bibulous native who dwelt in the middle of the block to waste some valuable minutes in dragging himself to one of these fountains of bliss at either end; but at the time my story opens a wide-awake philanthropist was fitting up a neat and attractive little bar-room, called "The Oasis," at a point equally distant between the other two springs of human joy.

This benefactor of humanity had a vaulting ambition. He desired to slake the thirst of every man in Christendom; but this being impossible from the very nature of things, he determined to settle in some arid spot like Minerva Court, and irrigate it so sweetly and copiously that all men's noses would blossom as the roses. To supply his brothers' wants, and create new ones at the same time, was his purpose in establishing this Oasis in the Desert of Minerva Court; and it might as well be stated here that he was prospered in his undertaking, as any man is sure to be who cherishes lofty ideals and attends to his business industriously.

The Minerva Courtier thus had good reason to hope that the supply of liquid refreshment would bear some relation to the demand; and that the march of modern progress would continue to diminish the distance between his own mouth and that of the bottle, which, as he took it, was the be-all and end-all of existence.

At present, however, as the Oasis was not open to the public, children carrying pitchers of beer were often to be seen hurrying to and fro on their miserable errands. But there were very few children in Minerva Court, thank God!—they were not popular there....