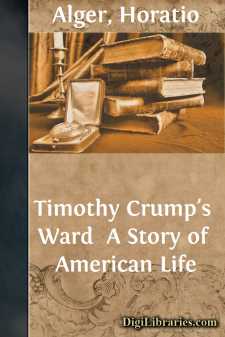 CHAPTER I. INTRODUCES THE CRUMPS.

IT was drawing towards the close of the last day of the year. A few hours more, and 1836 would be no more.

It was a cold day. There was no snow on the ground, but it was frozen into stiff ridges, making it uncomfortable to walk upon. The sun had been out all day, but there was little heat or comfort in its bright, but frosty beams.

The winter is a hard season for the poor. It multiplies their necessities, while, in general, it limits their means and opportunities of earning. The winter of 1836-37 was far from being an exception to this rule. It was worse than usual, on account of the general stagnation of business.

In an humble tenement, located on what was then the outskirts of New York, though to-day a granite warehouse stands on the spot, lived Timothy Crump, an industrious cooper. His family consisted of a wife and one child, a boy of twelve, whose baptismal name was John, though invariably addressed, by his companions, as Jack.

There was another member of the household who would be highly offended if she were not introduced, in due form, to the reader. This was Miss Rachel Crump, maiden sister of Uncle Tim, as he was usually designated.

Miss Rachel was not much like her brother, for while the latter was a good-hearted, cheerful easy man, who was inclined to view the world in its sunniest aspect, Rachel was cynical, and given to misanthropy. Poor Rachel, let us not be too hard upon thy infirmities. Could we lift the veil that hides the secrets of that virgin heart, it might be, perchance, that we should find a hidden cause, far back in the days when thy cheeks were rounder and thine eyes brighter, and thine aspect not quite so frosty. Ah, faithless Harry Fletcher! thou hadst some hand in that peevishness and repining which make Rachel Crump, and all about her, uncomfortable. Lured away by a prettier face, you left her to pass through life, unblessed by that love which every female heart craves, and for which no kindred love will compensate. It was your faithlessness that left her to walk, with repining spirit, the flinty path of the old maid.

Yes; it must be said—Rachel Crump was an old maid; not from choice, but hard necessity. And so, one by one, she closed up the avenues of her heart, and clothed herself with complaining, as with a garment. Being unblessed with earthly means, she had accepted the hearty invitation of her brother, and become an inmate of his family, where she paid her board by little services about the house, and obtained sufficient needle-work to replenish her wardrobe as often as there was occasion. Forty-five years had now rolled over her head, leaving clearer traces of their presence, doubtless, than if her spirit had been more cheerful; so that Rachel, whose strongly marked features never could have been handsome, was now undeniably homely.

Mrs. Crump, fortunately for her husband's peace, did not in the least resemble her sister-in-law. Her disposition was cheerful, and she had frequent occasion to remonstrate with her upon the dark view she took of life....