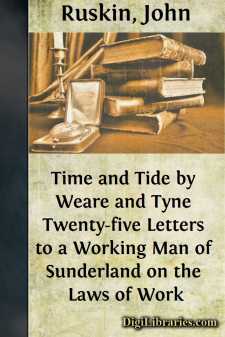 THE TWO KINDS OF CO-OPERATION.—IN ITS HIGHEST SENSE IT IS NOT YET THOUGHT OF.

1. You have now everything I have yet published on political economy; but there are several points in these books of mine which I intended to add notes to, and it seems little likely I shall get that soon done. So I think the best way of making up for the want of these is to write you a few simple letters, which you can read to other people, or send to be printed, if you like, in any of your journals where you think they may be useful.

I especially want you, for one thing, to understand the sense in which the word "co-operation" is used in my books. You will find I am always pleading for it; and yet I don't at all mean the co-operation of partnership (as opposed to the system of wages) which is now so gradually extending itself among our great firms. I am glad to see it doing so, yet not altogether glad: for none of you who are engaged in the immediate struggle between the system of co-operation and the system of mastership know how much the dispute involves; and none of us know the results to which it may finally lead. For the alternative is not, in reality, only between two modes of conducting business—it is between two different states of society. It is not the question whether an amount of wages, no greater in the end than that at present received by the men, may be paid to them in a way which shall give them share in the risks and interest in the prosperity of the business. The question is, really, whether the profits which are at present taken, as his own right, by the person whose capital, or energy, or ingenuity, has made him head of the firm, are not in some proportion to be divided among the subordinates of it.

2. I do not wish, for the moment, to enter into any inquiry as to the just claims of capital, or as to the proportions in which profits ought to be, or are in actually existing firms, divided. I merely take the one assured and essential condition, that a somewhat larger income will be in co-operative firms secured to the subordinates, by the diminution of the income of the chief. And the general tendency of such a system is to increase the facilities of advancement among the subordinates; to stimulate their ambition; to enable them to lay by, if they are provident, more ample and more early provision for declining years; and to form in the end a vast class of persons wholly different from the existing operative:—members of society, possessing each a moderate competence; able to procure, therefore, not indeed many of the luxuries, but all the comforts of life; and to devote some leisure to the attainments of liberal education, and to the other objects of free life. On the other hand, by the exact sum which is divided among them, more than their present wages, the fortune of the man who, under the present system, takes all the profits of the business, will be diminished; and the acquirement of large private fortune by regular means, and all the conditions of life belonging to such fortune, will be rendered impossible in the mercantile community.

3. Now, the magnitude of the social change hereby involved, and the consequent differences in the moral relations between individuals, have not as yet been thought of,—much less estimated,—by any of your writers on commercial subjects; and it is because I do not yet feel able to grapple with them that I have left untouched, in the books I send you, the question of co-operative labor. When I use the word "co-operation," it is not meant to refer to these new constitutions of firms at all. I use the word in a far wider sense, as opposed, not to masterhood, but to competition. I do not mean, for instance, by co-operation, that all the master bakers in a town are to give a share of their profits to the men who go out with the bread; but that the masters are not to try to undersell each other, nor seek each to get the other's business, but are all to form one society, selling to the public under a common law of severe penalty for unjust dealing, and at an established price. I do not mean that all bankers' clerks should be partners in the bank; but I do mean that all bankers should be members of a great national body, answerable as a society for all deposits; and that the private business of speculating with other people's money should take another name than that of "banking." And, for final instance, I mean by "co-operation" not only fellowships between trading firms, but between trading nations; so that it shall no more be thought (as it is now, with ludicrous and vain selfishness) an advantage for one nation to undersell another; and take its occupation away from it; but that the primal and eternal law of vital commerce shall be of all men understood—namely, that every nation is fitted by its character, and the nature of its territories, for some particular employments or manufactures; and that it is the true interest of every other nation to encourage it in such speciality, and by no means to interfere with, but in all ways forward and protect, its efforts, ceasing all rivalship with it, so soon as it is strong enough to occupy its proper place....