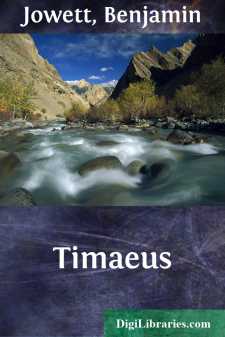 Socrates begins the Timaeus with a summary of the Republic. He lightly touches upon a few points,—the division of labour and distribution of the citizens into classes, the double nature and training of the guardians, the community of property and of women and children. But he makes no mention of the second education, or of the government of philosophers.

And now he desires to see the ideal State set in motion; he would like to know how she behaved in some great struggle. But he is unable to invent such a narrative himself; and he is afraid that the poets are equally incapable; for, although he pretends to have nothing to say against them, he remarks that they are a tribe of imitators, who can only describe what they have seen. And he fears that the Sophists, who are plentifully supplied with graces of speech, in their erratic way of life having never had a city or house of their own, may through want of experience err in their conception of philosophers and statesmen. 'And therefore to you I turn, Timaeus, citizen of Locris, who are at once a philosopher and a statesman, and to you, Critias, whom all Athenians know to be similarly accomplished, and to Hermocrates, who is also fitted by nature and education to share in our discourse.'

HERMOCRATES: 'We will do our best, and have been already preparing; for on our way home, Critias told us of an ancient tradition, which I wish, Critias, that you would repeat to Socrates.' 'I will, if Timaeus approves.' 'I approve.' Listen then, Socrates, to a tale of Solon's, who, being the friend of Dropidas my great-grandfather, told it to my grandfather Critias, and he told me. The narrative related to ancient famous actions of the Athenian people, and to one especially, which I will rehearse in honour of you and of the goddess. Critias when he told this tale of the olden time, was ninety years old, I being not more than ten. The occasion of the rehearsal was the day of the Apaturia called the Registration of Youth, at which our parents gave prizes for recitation. Some poems of Solon were recited by the boys. They had not at that time gone out of fashion, and the recital of them led some one to say, perhaps in compliment to Critias, that Solon was not only the wisest of men but also the best of poets. The old man brightened up at hearing this, and said: Had Solon only had the leisure which was required to complete the famous legend which he brought with him from Egypt he would have been as distinguished as Homer and Hesiod. 'And what was the subject of the poem?' said the person who made the remark. The subject was a very noble one; he described the most famous action in which the Athenian people were ever engaged. But the memory of their exploits has passed away owing to the lapse of time and the extinction of the actors. 'Tell us,' said the other, 'the whole story, and where Solon heard the story.' He replied—There is at the head of the Egyptian Delta, where the river Nile divides, a city and district called Sais; the city was the birthplace of King Amasis, and is under the protection of the goddess Neith or Athene....