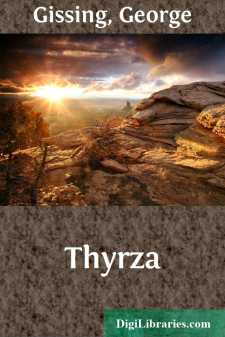 There were three at the breakfast-table—Mr. Newthorpe, his daughter Annabel, and their visitor (Annabel's Cousin), Miss Paula Tyrrell. It was a small, low, soberly-furnished room, the walls covered with carelessly-hung etchings and water-colours, and with photographs which were doubtless mementoes of travel; dwarf bookcases held overflowings from the library; volumes in disorder, clearly more for use than ornament. The casements were open to let in the air of a July morning. Between the thickets of the garden the eye caught glimpses of sun-smitten lake and sheer hillside; for the house stood on the shore of Ullswater.

Of the three breakfasting, Miss Tyrrell was certainly the one whose presence would least allow itself to be overlooked. Her appetite was hearty, but it scarcely interfered with the free flow of her airy talk, which was independent of remark or reply from her companions. Though it was not apparent in her demeanour, this young lady was suffering under a Calamity; her second 'season' had been ruined at its very culmination by a ludicrous contretemps in the shape of an attack of measles. Just when she flattered herself that she had never looked so lovely, an instrument of destiny embraced her in the shape of an affectionate child, and lo! she was a fright. Her constitution had soon thrown off the evil thing, but Mrs. Tyrrell decreed her banishment for a time to the remote dwelling of her literary uncle. Once more Paula was lovely, and yet one could scarcely say that the worst was over, seeing that she was constrained to pass summer days within view of Helvellyn when she might have been in Piccadilly.

Mr. Newthorpe seldom interrupted his niece's monologue, but his eye often rested upon her, seemingly in good-natured speculation, and he bent his head acquiescingly when she put in a quick 'Don't you think so?' after a running series of comments on some matter which smacked exceedingly of the town. He was not more than five-and-forty, yet had thin, grizzled hair, and a sallow face with lines of trouble deeply scored upon it. His costume was very careless—indeed, all but slovenly—and his attitude in the chair showed, if not weakness of body, at all events physical indolence.

Some word that fell from Paula prompted him to ask:

'I wonder where Egremont is?'

Annabel, who had been sunk in thought, looked up with a smile. She was about to say something, but her cousin replied rapidly:

'Oh, Mr. Egremont is in London—at least, he was a month ago.'

'Not much of a guarantee that he is there now,' Mr. Newthorpe rejoined.

'I'll drop him a line and see,' said Paula. 'I meant to do so yesterday, but forgot. I'll write and tell him to send me a full account of himself. Isn't it too bad that people don't write to me? Everybody forgets you when you're out of town in the season. Now you'll see I shan't have a single letter again this morning; it is the cruellest thing!'

'But you had a letter yesterday, Paula,' Annabel remarked.