Through Three Campaigns A Story of Chitral, Tirah and Ashanti 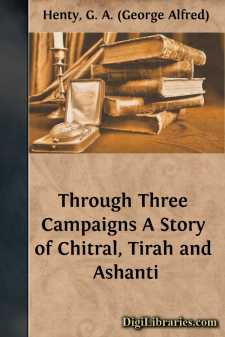 Our little wars attract far less attention among the people of this country than they deserve. They are frequently carried out in circumstances of the most adverse kind. Our enemies, although ignorant of military discipline are, as a rule, extremely brave; and are thoroughly capable of using the natural advantages of their country. Our men are called upon to bear enormous fatigue, and endure extremes in climate. The fighting is incessant, the peril constant. Nevertheless, they show a magnificent contempt for danger and difficulty; and fight with a valour and determination worthy of the highest praise.

I have chosen, as an illustration of this, three campaigns; namely, the relief of Chitral, the Tirah campaign, and the relief of Coomassie. The first two were conducted in a mountainous country, affording every advantage to the enemy; where passes had to be scaled, torrents to be forded, and deep snow to be crossed. In the other, the country was a combination of morass and thick forest, frequently intersected by wide and deep rivers. The work, moreover, had to be done in a tropical climate, during the rainy season. The conditions, therefore, were much more trying than in the case of former expeditions which had crossed the same ground and, in addition, the enemy were vastly more numerous and more determined; and had, in recent years, mastered the art of building extremely formidable stockades.

The country has a right to be proud, indeed, of the prowess both of our own troops and of our native regiments. Boys who wish to obtain fuller details of these campaigns I would refer to Sir George Robertson's Chitral; H. C. Thomson's Chitral Campaign; Lieutenant Beynon's With Kelly to Chitral; Colonel Hutchison's Campaign in Tirah; Viscount Fincastle and P. C. Eliott Lockhart's A Frontier Campaign; and Captain Harold C. J. Biss's The Relief of Kumasi, from which I have principally drawn the historical portion of my story.

"Well, Lisle, my boy, the time is drawing very near when you will have to go home. My brother John will look after you, and choose some good crammer to push you on. You are nearly sixteen, now, and it is high time you buckled to."

"But you have always taught me, father!"

"Yes, that is all very well, but I could not devote three hours a day to you. I think I may say that you are thoroughly well grounded--I hope as well as most public-school boys of your own age--but I can go no further with you. You have no idea what cramming is necessary, now, for a young fellow to pass into the army. Still I think that, by hard work with some man who prepares students for the army, you may be able to rub through. I have always saved up money for this, for my brother is by no means a rich man, and crammers are very expensive; so the next time I see a chance of sending you down to Calcutta, down you go. My agents there will see you on board a ship, and do everything that is necessary."

"Of course, father, if I must go, I must; but it will be beastly, after the jolly time I have spent in the regiment, to set to and do nothing but grind, for the next three years."

"We all have to do a good many unpleasant things, Lisle; and as we have decided that you shall enter the army, you must make up your mind to do the necessary work, even though it be disagreeable."