Through the Fray A Tale of the Luddite Riots 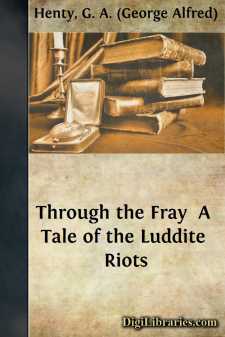 CHAPTER I: A FISHING EXPEDITION

It has just struck one, and the boys are streaming out from the schoolroom of Mr. Hathorn's academy in the little town of Marsden in Yorkshire. Their appearance would create some astonishment in the minds of lads of the present generation, for it was the year 1807, and their attire differed somewhat materially from that now worn. They were for the most part dressed in breeches tight at the knee, and buttoning up outside the close fitting jacket nearly under the arms, so that they seemed almost devoid of waist. At the present moment they were bareheaded; but when they went beyond the precincts of the school they wore stiff caps, flat and very large at the top, and with far projecting peaks.

They were not altogether a happy looking set of boys, and many of their cheeks were stained with tears and begrimed with dirt from the knuckles which had been used to wipe them away; for there was in the year 1807 but one known method of instilling instruction into the youthful mind, namely, the cane, and one of the chief qualifications of a schoolmaster was to be able to hit hard and sharp.

Mr. Hathorn, judged by this standard, stood very high in his profession; his cane seemed to whiz through the air, so rapidly and strongly did it descend, and he had the knack of finding out tender places, and of hitting them unerringly.

Any one passing in front of the schoolhouse during the hours when the boys were at their lessons would be almost sure to hear the sharp cracks of the cane, followed sometimes by dead silence, when the recipient of the blows was of a sturdy and Spartan disposition, but more frequently by shrieks and cries.

That Hathorn's boys hated their master was almost a matter of course. At the same time they were far from regarding him as an exceptional monster of cruelty, for they knew from their friends that flogging prevailed almost everywhere, and accepted it as a necessary portion of the woes of boyhood. Indeed, in some respects, when not smarting under the infliction, they were inclined to believe that their lot was, in comparison with that of others, a fortunate one; for whereas in many schools the diet was so poor and bad that the boys were half starved, at Hathorn's if their food was simple and coarse it was at least wholesome and abundant.

Mr. Hathorn, in fact, intended, and as he quite believed with success, to do his duty by his boys. They were sent to him to be taught, and he taught them through the medium then recognized as most fitting for the purpose—the cane; while, as far as an abundance of porridge for breakfast, and of heavy pudding at dinner, with twice a week an allowance of meat, the boys were unstinted. He would indeed point with pride to his pupils when their parents assembled at the annual presentation of prizes.

"Look at them!" he would say proudly. "None of your half starved skeletons here—well filled out and in good condition every boy of them—no stint of porridge here. It keeps them in good health and improves their learning; for, mark you, a plump boy feels the cane twice as much as a skinny one; it stings, my dear sir, it stings, and leaves its mark; whereas there is no getting at a boy whose clothes hang like bags about him."

This was no doubt true, and the boys themselves were conscious of it, and many had been the stern resolutions made while smarting in agony that henceforward food should be eschewed, or taken only in sufficient quantities to keep life together....