Through St. Dunstan's to Light 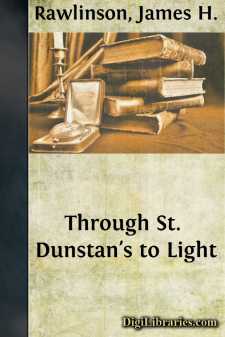 CHAPTER I MY TICKET FOR BLIGHTY

In the World War, it was not only the men who went "over the top" to assault enemy positions who ran great risks. Scouts, snipers, patrols, working parties, all took their lives in their hands every time they ventured into No Man's Land, and even those who were engaged in essential work behind the lines were far from being safe from death or wounds. On the morning of June 7th, 1917, before dawn had broken, I was out with a working party. Suddenly, overhead, sounded the ominous drumming and droning of an aeroplane. It proved to be a Hun plane; the aviator had spotted us, and was speedily in touch with the battery for which he was working. Fortunately for us, he had mistaken our exact position, and evidently thought we were on a road which ran towards the front line about thirty yards to our left. The enemy guns, in answer to his signals, opened up with a terrific fire, and the scenery round about was soon in a fine mess. Shells of varying calibre came thundering in our direction, throwing up, as they burst, miniature volcanoes and filling the air with dust and mud and smoke. This shell-fire continued for about three-quarters of an hour, but due to the defect in the aviator's signals and our own skill in taking cover we suffered no casualties. We were congratulating ourselves that we were to pass through this ordeal uninjured, when suddenly a 5.9-inch shell fell short. It exploded almost in our midst, and I was unlucky enough to get in the way of one of the shrapnel bullets. I felt a slight sting in my right temple as though pricked by a red-hot needle—and then the world became black.

Dawn was now breaking, but night had sealed my eyes, and I could only grope my way among my comrades. I was hit about 2.30 a.m., and it speaks volumes for the Medical Service that at 2 p.m. I was tucked safely in bed in a thoroughly-equipped hospital many miles from the scene of my mishap.

Willing hands tenderly dressed my wounds and led me to the foot of the ridge on which we were located. I was then placed on a stretcher, and carried up the slope to one of the narrow-gauge railways that had been run to the crest of Vimy Ridge. I was now taken to the end of what is called the Y Road, and thence borne to one of the ambulances which are always in waiting there, grim reminders of the work in hand.

My first impression of my ambulance driver was that I had fallen into the hands of a Good Samaritan. He was most solicitous about the welfare of the "head-case," and kept showering me with questions, such as: "Are you comfortable, Mac?" (everyone in the Canadian Corps was "Mac" to the stranger). "Tell me if I am driving too fast for you; you know, the roads are a little lumpy round here." I didn't know it, but I was quickly to become aware of the fact. His words and his driving did not harmonize; if he missed a single shell-hole in the wide stretch of France through which he drove, it was not his fault. I shall never forget the agony of that drive; but at length, bruised and shaken, I arrived at the Casualty Clearing Station at—but, no, I will not mention its name; some of my readers may know the men who were there at the time of my arrival, and there is pain enough in the world without unnecessarily adding to the total. At the Clearing Station I learned two things: First, that all the best souvenirs of the war are in the possession of men who seldom or never saw the front line; and, secondly, the real meaning, so far as the wounded "Tommy" is concerned, of the letters R.A.M.C. The official records say they stand for the Royal Army Medical Corps; but ask the men who have passed through the hands of the Corps....