Through Space to Mars Or the Longest Journey on Record 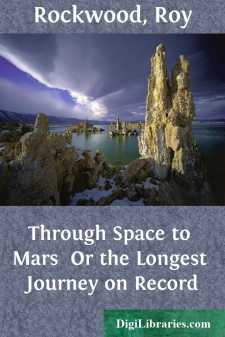 "Are we really in motion?" asked Jack, after a moment's silence. "It doesn't seem so."

"We are certainly in motion," declared Mr. Roumann. "See this dial?"

He pointed to one near the steering wheel. The hand on it was gently vibrating between some of the figures.

"We are traveling that many miles a second," went on the scientist. "The atmospheric motor is not working as fast as I hoped it would, but we are going fast enough. When we start the Etherium machine we shall go much more speedily."

"And when will that be?" asked Mark.

"I can't tell exactly. It will not be until we have passed through the atmosphere of the earth, and there is no way of ascertaining in advance just how thick that stratum is."

"Then how will you know?" asked Jack.

"By means of my instruments. When the hand on this dial points to zero I will know that we are beyond the atmosphere, and that it is time to start the Etherium motor."

"How do you know in which direction to steer?" asked Mark. "Can you see anything out of that window?"

"Not a thing," replied the German. "Look for yourself."

Jack and Mark peered through the plate glass. All they could see was a sort of white, fleecy mass of clouds that surrounded the great projectile.

"It's just like when we were above the clouds in the Electric Monarch," said Jack.

"But if you can't see anything, how can you tell where to steer?" asked Mark.

"By means of this instrument," replied Mr. Roumann, indicating another among the many on the wall of the projectile. "This is automatically kept pointed at Mars, and by means of a hand and dial I can tell how to keep the Annihilator aimed directly at the red planet."

"Even when it is on the opposite side of the earth from us?" asked Jack.

"We are now far above the earth," was the answer, "and the planet on which we lived offers no obstruction to my telescope being pointed at Mars, even though it is daytime, when Mars is on the opposite side of the earth."

"Have we traveled as far as that?" asked Jack in awestruck tones.

"But we don't seem to be moving at all," objected Mark.

"That is because we are shooting through space so fast, and because you can see no stationary objects with which to make a comparison, as when you are traveling on a railroad train," continued the German. "And, as we are not dependent on tracks, or roads, with their unevenness, there is no motion to our projectile, save that of moving through space. That is why it seems as if we were standing still."

"But thirty thousand miles!" cried Jack. "I thought the earth's atmosphere was variously estimated at from only forty to two hundred miles in thickness."

"The oxygen atmosphere may be," agreed Mr. Roumann. "As a matter of fact, the atmosphere we are now in would not support life for you and me a single instant. But it is atmosphere, nevertheless, or my instruments would indicate something different, and my atmospheric motor would not work....