Through Russian Snows A Story of Napoleon's Retreat from Moscow 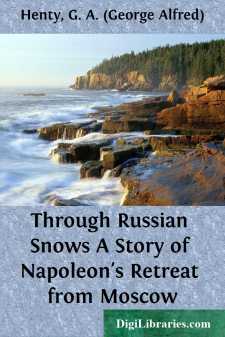 When Colonel Wyatt died, all Weymouth agreed that it was a most unfortunate thing for his sons Julian and Frank. The loss of a father is always a misfortune to lads, but it was more than usually so in this case. They had lost their mother years before, and Colonel Wyatt's sister had since kept house for him. As a housekeeper she was an efficient substitute, as a mother to the boys she was a complete failure. How she ever came to be Colonel Wyatt's sister was a puzzle to all their acquaintances. The Colonel was quick and alert, sharp and decisive in speech, strong in his opinions, peremptory in his manner, kindly at heart, but irascible in temper. Mrs. Troutbeck was gentle and almost timid in manner; report said that she had had a hard time of it in her married life, and that Troutbeck had frightened out of her any vestige of spirit that she had ever possessed. Mrs. Troutbeck never argued, and was always in perfect agreement with any opinion expressed, a habit that was constantly exciting the wrath and indignation of her brother.

The idea of controlling the boys never once entered her mind. So long as the Colonel was alive there was no occasion for such control, and in this respect she did not attempt after his death to fill his place. It seemed, indeed, that she simply transferred her allegiance from the Colonel to them. Whatever they did was right in her eyes, and they were allowed to do practically whatever they pleased. There was a difference in age of three years and a half between the brothers; Julian at the time of his father's death being sixteen, while Frank was still a few months short of thirteen. Casual acquaintances often remarked that there was a great likeness between them; and, indeed, both were pleasant-looking lads with somewhat fair complexions, their brown hair having a tendency to stand up in a tuft on the forehead, while both had grey eyes, and square foreheads. Mrs. Troutbeck was always ready to assent to the remark as to their likeness, but would gently qualify it by saying that it did not strike her so much as it did other people.

"Their dispositions are quite different," she said, "and knowing them as I do, I see the same differences in their faces."

Any close observer would, indeed, have recognized it at once. Both faces were pleasant, but while Julian's wore an expression of easy good temper, and a willingness to please and to be pleased, there was a lack of power and will in the lower part of the face; there was neither firmness in the mouth nor determination in the chin. Upon the other hand, except when smiling or talking, Frank's lips were closely pressed together, and his square chin and jaw clearly indicated firmness of will and tenacity of purpose. Julian was his aunt's favourite, and was one of the most popular boys at his school. He liked being popular, and as long as it did not put him to any great personal trouble was always ready to fall in with any proposal, to take part in every prank, to lend or give money if he had it in his pocket, to sympathize with any one in trouble....