Through Palestine with the Twentieth Machine Gun Squadron 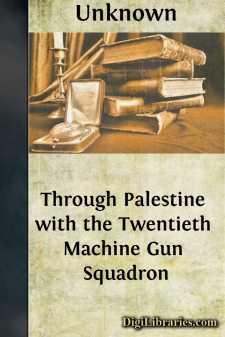 Formation of the Squadron.

It was on the 4th July 1917 that authority was given to the 7th Mounted Brigade (then at Ferry-Post, Ismailia), for the formation of a Machine-Gun Squadron to be known as the "20th." It was to consist of "Headquarters" and only three sub-sections, there being but two regiments (instead of the usual three) in the 7th Brigade.

On July 4th, Lieut. E.P. Cazalet and Lieut. E.B. Hibbert, machine gun officers of the Notts (Sherwood Rangers) Yeomanry and South Notts Hussars respectively, brought their sub-sections to the new camp. Lieut. C.D. Macmillan also arrived from the "S.N.H." From these two regiments there came, in all, 3 officers, 121 men and 98 animals (horses and mules). The "A" Sub-section was formed of "S.R.Y." men; the "B" Sub-section of "S.N.H." men, "C" Sub-section being composed of both "S.R.Y." and "S.N.H." men.

From the commencement, the Squadron "carried on" under very difficult conditions, as, out of its total strength of 121, only 30 men were qualified gunners, and 63 had never previously been attached to a Machine Gun Section. Then there were fresh animals to draw from "Remounts" besides new saddlery and equipment from "Ordnance". The health of the Squadron, also, was at first none too good; a large number of men had contracted malaria whilst with the Brigade in Salonica, and many others were liable to septic sores, after two years' sojourn in Egypt, Suvla and Salonica. From time to time, seven days' leave was granted to small parties to the Rest Camp, Port Said, and lucky were those men whose turn it was to go!

In due course, on July 30th 1917, Lieut. D. Marshall (Fife & Forfar Yeomanry), arrived from the 4th "M.G." Company. He had been "posted" as Commanding Officer, and "took over" from Lieut. Cazalet; shortly afterwards he was promoted to the rank of Captain.

The first reinforcements to reach the Squadron from the training centre at Maresfield Park, England, were Ptes. Ramsay and Wick on August 4th 1917. Pte. Ramsay at once took up the duties of orderly-room clerk, and was subsequently promoted sergeant. The work of equipping, organising and training were hurried on, the new guns tested on the range, and at length, on August 6th, the Squadron was inspected with the Brigade by General Bailloud.

On August 8th, Capt. E. Davies (previously with the 7th Brigade in Egypt) arrived from "leave" in the United Kingdom, and was posted to the Squadron as "second in command". Orders were received on August 10th that the Brigade would move to the Palestine front on the 12th—within a month of the M.G. Squadron being formed!

Our Trek to Amr, through the Desert of the Sinai Peninsula.

The forthcoming continuous trek (which lasted 18 days) through the desert at the hottest time of the year was no light task for a new unit to contemplate, and the two days in which to make all the preparations were none too many; yet, everything was ready by the time ordered for parade, and from that moment the "20th M.G. Squadron" became a fighting force! There was, however, a lot of training still to be done, before it could hope to play its proper part in active operations.

The organisation of the transport for the unit was one of the greatest difficulties to be overcome. No one, unless he has actually seen it, would believe the energy required to pull even a lightly loaded wheeled vehicle through the desert sand, which, in places, is of the soft "silver" variety found at many English seaside resorts.

Each "G.S." (general service) limbered wagon is designed to carry about a ton, and is drawn by 4 mules. On this occasion, however, 4 cwts. was the maximum load, and for this 6 mules were required in every case. In spite of such a team, the going was hard enough, in very truth, and sore shoulders were not uncommon, owing to the mules being so "soft," and the new breast-collars so hard...!