Through Our Unknown Southwest 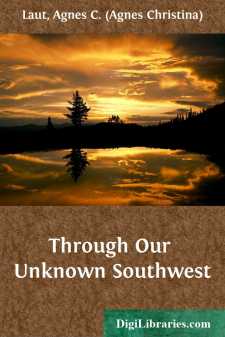 I am sitting in the doorway of a house of the Stone Age—neolithic, paleolithic, troglodytic man—with a roofless city of the dead lying in the valley below and the eagles circling with lonely cries along the yawning caverns of the cliff face above.

My feet rest on the topmost step of a stone stairway worn hip-deep in the rocks of eternity by the moccasined tread of foot-prints that run back, not to A. D. or B. C., but to those post-glacial æons when the advances and recessions of an ice invasion from the Poles left seas where now are deserts; when giant sequoia forests were swept under the sands by the flood waters, and the mammoth and the dinosaur and the brontosaur wallowed where now nestle farm hamlets.

Such a tiny doorway it is that Stone Man must have been obliged to welcome a friend by hauling him shoulders foremost through the entrance, or able to speed the parting foe down the steep stairway with a rock on his head. Inside, behind me, is a little dome-roofed room, with calcimined walls, and squared stone meal bins, and a little, high fireplace, and stone pillows, and a homemade flour mill in the form of a flat metate stone with a round grinding stone on top. From the shape and from the remnants of pottery shards lying about, I suspect one of these hewn alcoves in the inner wall was the place for the family water jar.

On each side the room are tiny doorways leading by stone steps to apartments below and to rooms above; so that you may begin with a valley floor room which you enter by ladder and go halfway to the top of a 500-foot cliff by a series of interior ladders and stone stairs. Flush with the floor at the sides of these doors are the most curious little round "cat holes" through the walls—"cat holes" for a people who are not supposed to have had any cats; yet the little round holes run from room to room through all the walls.

On some of the house fronts are painted emblems of the sun. Inside, round the wall of the other houses, runs a drawing of the plumed serpent—"Awanya," guardian of the waters—whose presence always presaged good cheer of water in a desert land growing drier and drier as the Glacial Age receded, and whose serpent emblem in the sky you could see across the heavens of a starry night in the Milky Way. Lying about in other cave houses are stone "bells" to call to meals or prayers, and cobs of corn, and prayer plumes—owl or turkey feathers. Don't smile and be superior! It isn't a hundred years ago since the common Christian idea of angels was feathers and wings; and these Stone People lived—well, when did they live? Not later than 400 A. D., for that was when the period of desiccation, or drought from the recession of the glacial waters, began.

Ruins of South House, one of the great communal dwellings of Frijoles Cañon, after excavation

"The existence of man in the Glacial Period is established," says Winchell, the great western geologist, "that implies man during the period when flourished the large mammals now extinct....