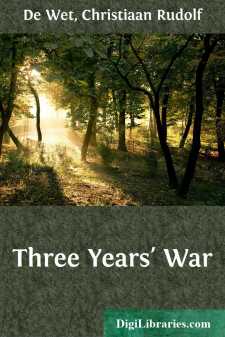 Add to My Favorites
Published: 8 years ago
Downloads: 69
Rating: (0 Votes)

CHAPTER I I Go on Commando as a Private Burgher

In the month of September, 1899, the burghers of the Orange Free State were notified, under the Commando Law, to hold themselves in readiness to go on active service at the shortest possible notice.

Before proceeding any further I should like to explain that portion of the Commando Law which dealt with commandeering. It stipulated that every burgher between the ages of sixteen and sixty must be prepared to fight for his country at any moment; and that, if required for active service, he must provide himself with a riding-horse, saddle and bridle, with a rifle and thirty cartridges—or, if he were unable to obtain a rifle, he must bring with him thirty bullets, thirty caps, and half a pound of powder—in addition he must be provisioned for eight days. That there should have been an alternative to the rifle was due to the fact that the law was made at a time when only a few burghers possessed breech-loading rifles—achterlaaiers, as we call them.

With reference to the provisions the law did not specify their quality or quantity, but there was an unwritten but strictly observed rule amongst the burghers that they should consist of meat cut in strips, salted, peppered, and dried, or else of sausages and "Boer biscuits." With regard to quantity, each burgher had to make his own estimate of the amount he would require for eight days.

It was not long after they were notified to hold themselves ready that the burghers were called up for active service. On the 2nd of October, 1899, the order came. On that day the Veldtcornets, or their lieutenants, visited every farm and commandeered the men.

Amongst the commandeered was I; and thus, as a private burgher, I entered on the campaign. With me were my three sons—Kootie, Isaac, and Christiaan.

The following day the men of the sub-district of Krom Ellenborg, in the district of Heilbron—to which I belonged—mustered at Elandslaagte Farm. The Veldtcornet of this sub-district was Mr. Marthinus Els, and the Commandant of the whole contingent Mr. Lucas Steenekamp. It soon became known that the War Commission had decided that our commando was to proceed as rapidly as possible to the Natal frontier, and that with us were to go the troops from Vrede and Harrismith, as well as some from Bethlehem, Winburg, and Kroonstad. Carrying out these orders, we all arrived at Harrismith six days later.

The eight days during which the burghers had to feed themselves were soon over, and now it was the duty of the Government to provide for them.

It may be interesting to mention here that the British commissariat differed greatly from ours. Rations were served out daily to their troops. Each soldier received the same quantity and the same quality as his comrade. Our methods were very different, except as regards flour, coffee, sugar, and other articles of that nature. The British soldier, for instance, received his meat ready cooked in the form of bully-beef (blikkiescost we called it), whilst the burgher received his meat raw, and had to cook it as best he could....