Three Years in the Sixth Corps A Concise Narrative of Events in the Army of the Potomac, from 1861 to the Close of the Rebellion, April, 1865 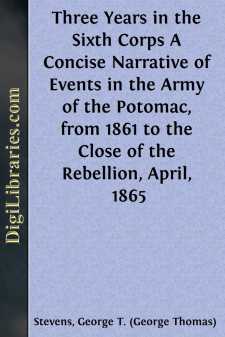 A NEW REGIMENT GOES TO THE WAR.

Our regiment was organized at Saratoga Springs, the historic scene of the battle of Bemis Heights and the surrender of Burgoyne—hence its name, "The Bemis Heights Battalion." Hon. Jas. B. McKean, then member of congress, a gentleman of well known patriotism, was made our Colonel. We left our rendezvous on the 26th of November, 1861, Thanksgiving day, having been mustered into the United States service three days before.

As the long train of cars bore us from the station at Saratoga Springs, the thousands who had gathered to witness our departure united in cheer after cheer until all the groves and vales of that charming resort rang with the echoes of the tumultuous shouting.

The thousand brave fellows, who were about to try the stern realities of war, were by no means backward in replying to these hearty expressions of good wishes. Long after we had lost sight of the lovely village, the shouts of the multitude could be heard and the hills rang again with the responding cheers of those in the cars. At each station, as we passed, crowds of people pressed to greet us, and loud and long were the cheers that bade us "God speed."

We were now fairly off for the war. We who had followed the various peaceful avocations of life, in the professions or in the workshops, in trade or in husbandry, had now turned away from the office, the desk, the shop and the plough, to join the Grand Army upon which the hopes of the nation were staked, and which we confidently believed was soon to sweep the rebellion to destruction.

Emotions hitherto unknown to us filled our hearts. We were soldiers, wearing for the first time the army blue, and perhaps soon to be called out to meet in deadly strife an enemy whose prestige for valor was already too well established.

Were we to return to the friends from whom we had just parted, bearing the chaplet of victory, or were we to find a last resting place on some field of the south, never again to meet with wife or sister, father or mother? Four years have passed and those doubts have been solved. Many of those brave men have gone to their long rest.

"Their graves are severed far and wide."

Some sleep beneath the tall pines of Yorktown; and the bright azalia casts its purple blossoms over the graves of many who lie in the swamps of the Chickahominy. The Antietam murmurs a requiem to those who rest on its banks, and green is the turf above the noble ones who fell gloriously at Fredericksburgh. Some rest amid the wild tangles of the Wilderness, and upon the arid plain of Coal Harbor. Many of their graves are upon the banks of the Ny and the Po. The marble monument at Fort Stevens tells the names of some who gave their lives in the defense of the Capital, while the simple headboards of pine tell where repose many in the valley of the Shenandoah, and before Petersburgh....