Three years in France with the Guns: Being Episodes in the life of a Field Battery 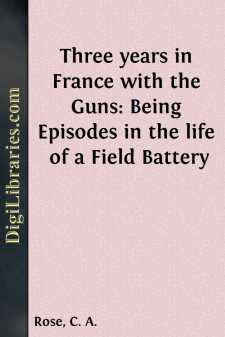 On a morning early in August, 1915, the Brigade disembarked at Havre without mishap to man, horse, or material, and proceeded to a Rest Camp on the outskirts of the town. We were in France at last! The same evening the Batteries started to entrain, and every two hours a complete unit was despatched up the line—to an unknown destination. The men received refreshments at various Haltes, and the horses were duly watered and fed, but the journey was, on the whole, long and tedious. On one occasion only was the monotony broken, and that unwittingly, by the humour of one of the officers. In the course of the evening, the train stopped at a small station, and the compartment in which the officers were settled drew up in front of the Buffet. Some one asked where we were, and a subaltern, anxious to display his newly-acquired knowledge of French, replied, "Bouvette," which called forth no response. Shortly afterwards the train proceeded on its way, and the occupants of the carriage settled themselves down to sleep. All passed quietly for the next couple of hours—then the train stopped once more, and, as luck would have it, again our carriage came to a standstill directly opposite the buffet of the station. At once a question was asked as to our whereabouts. The same subaltern, shaking himself out of a deep slumber, stretched, roused himself, and, peering out of the window, exclaimed, "Good Lor', still at this beastly hole, 'Bouvette'!" He expressed much surprise at the "unseemly mirth," as he described it, which followed!!

After detraining, the Battery marched through beautiful country, which reminded one of the Borders, as it was not unlike the valley of the Tweed, and we were at once taken to the hearts of the inhabitants of the good village of Seningham, which place was destined to be our home for the next few days. The officers were afforded spacious accommodation in the house of the Maire, whilst the men had comfortable billets in the neighbourhood. Time was spent making our unit shipshape after its travels by land and sea, and the "hairies" obtained as much grazing as possible, to make them fit for what was in store for them. It was wonderful how quickly the men adapted themselves to French ways, and much amusement was caused by their eager, if somewhat unsuccessful, attempts to master the language of our Allies.

When it became known that the officers were anxious to increase their knowledge of the language of the country, the maidens of the village vied with one another to obtain posts as instructresses, and there was nearly a free fight amongst them for the possession of our worthy Senior Subaltern, whose taking ways did not fail to catch their attention!

But, alas! our peaceful warfare was not to be for long! One morning sudden orders came through to prepare for the line in a couple of days' time. All was instant bustle, extra grooming was given to the horses, and finishing touches were put to the howitzers and vehicles. We were to be given a trial in action to show how we would comport ourselves before joining the "Feet" of our own Division, the Guards, who at that time were out at rest....