Three Times and Out 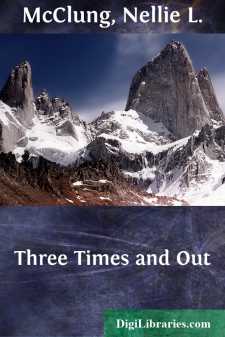 CHAPTER I HOW IT STARTED

"England has declared war on Germany!"

We were working on a pumphouse, on the Columbia River, at Trail, British Columbia, when these words were shouted at us from the door by the boss carpenter, who had come down from the smelter to tell us that the news had just come over the wire.

Every one stopped work, and for a full minute not a word was spoken. Then Hill, a British reservist who was my work-mate, laid down his hammer and put on his coat. There was neither haste nor excitement in his movements, but a settled conviction that gave me a queer feeling. I began to argue just where we had left off, for the prospect of war had been threshed out for the last two days with great thoroughness. "It will be settled," I said. "Nations cannot go to war now. It would be suicide, with all the modern methods of destruction. It will be settled by a war council—and all forgotten in a month."

Hill, who had argued so well a few minutes ago and told us all the reasons he had for expecting war with Germany, would not waste a word on me now. England was at war—and he was part of England's war machine.

"I am quitting, George," he said to the boss carpenter, as he pulled his cap down on his head and started up the bank.

That night he began to drill us in the skating-rink.

I worked on for about a week, but from the first I determined to go if any one went from Canada. I don't suppose it was all patriotism. Part of it was the love of adventure, and a desire to see the world; for though I was a steady-going carpenter chap, I had many dreams as I worked with hammer and saw, and one of them was that I would travel far and see how people lived in other countries. The thought of war had always been repellent to me, and many an argument I had had with the German baker in whose house I roomed, on the subject of compulsory military training for boys. He often pointed out a stoop-shouldered, hollow-chested boy who lived on the same street, and told me that if this boy had lived in Germany he would have walked straighter and developed a chest, instead of slouching through life the way he was doing. He and his wife and the grown-up daughter were devoted to their country, and often told us of how well the working-people were housed in Germany and the affairs of the country conducted.

But I think the war was as great a surprise to them as to us, and although the two women told us we were foolish to go to fight—it was no business of ours if England wanted to get into a row—it made no difference in our friendly relations, and the day we left Clara came to the station with a box of candy. I suppose if we had known as much then as we do now about German diplomacy, we shouldn't have eaten it, but we only knew then that Clara's candy was the best going, and so we ate it, and often wished for more.

I have since heard, however, of other Germans in Canada who knew more of their country's plans, and openly spoke of them. One of these, employed by the Government, told the people in the office where he worked that when Germany got hold of Canada, she would straighten out the crooked streets in our towns and not allow shacks to be built on the good streets, and would see to it that houses were not crowded together; and the strangest part of it is that the people to whom he spoke attached no importance whatever to his words until the war came and the German mysteriously disappeared....