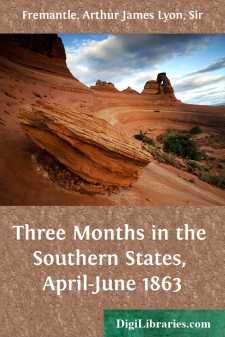 2d March 1863.—I left England in the royal mail steamer Atrato, and arrived at St Thomas on the 17th.

22d March.—Anchored at Havana at 6.15 a.m., where I fell in with my old friend, H.M.'s frigate Immortalité. Captain Hancock not only volunteered to take me as his guest to Matamoros, but also to take a Texan merchant, whose acquaintance I had made in the Atrato. This gentleman's name is M'Carthy. He is of Irish birth—an excellent fellow, and a good companion; and when he understood my wish to see the "South," he had most good-naturedly volunteered to pilot me over part of the Texan deserts. I owe much to Captain Hancock's kindness.

23d March.—Left Havana in H.M.S. Immortalité, at 11 a.m. Knocked off steam when outside the harbour.

1st April.—Anchored at 8.30 p.m., three miles from the mouth of the Rio Grande, or Rio Bravo del Norte, which is, I believe, its more correct name, in the midst of about seventy merchant vessels.

2d April.—The Texan and I left the Immortalité, in her cutter, at 10 a.m., and crossed the bar in fine style. The cutter was steered by Mr Johnston, the master, and having a fair wind, we passed in like a flash of lightning, and landed at the miserable village of Bagdad, on the Mexican bank of the Rio Grande.

The bar was luckily in capital order—3½ feet of water, and smooth. It is often impassable for ten or twelve days together: the depth of water varying from 2 to 5 feet. It is very dangerous, from the heavy surf and under-current; sharks also abound. Boats are frequently capsized in crossing it, and the Orlando lost a man on it about a month ago.

Seventy vessels are constantly at anchor outside the bar; their cotton cargoes being brought to them, with very great delays, by two small steamers from Bagdad. These steamers draw only 3 feet of water, and realise an enormous profit.

Bagdad consists of a few miserable wooden shanties, which have sprung into existence since the war began. For an immense distance endless bales of cotton are to be seen.

Immediately we landed, M'Carthy was greeted by his brother merchants. He introduced me to Mr Ituria, a Mexican, who promised to take me in his buggy to Brownsville, on the Texan bank of the river opposite Matamoros. M'Carthy was to follow in the evening to Matamoros.

The Rio Grande is very tortuous and shallow; the distance by river to Matamoros is sixty-five miles, and it is navigated by steamers, which sometimes perform the trip in twelve hours, but more often take twenty-four, so constantly do they get aground.

The distance from Bagdad to Matamoros by land is thirty-five miles; on the Texan side to Brownsville, twenty-six miles.

I crossed the river from Bagdad with Mr Ituria, at 11 o'clock; and as I had no pass, I was taken before half-a-dozen Confederate officers, who were seated round a fire contemplating a tin of potatoes. These officers belonged to Duff's cavalry (Duff being my Texan's partner). Their dress consisted simply of flannel shirts, very ancient trousers, jack-boots with enormous spurs, and black felt hats, ornamented with the "lone star of Texas." They looked rough and dirty, but were extremely civil to me....