Three Lives Stories of The Good Anna, Melanctha and The Gentle Lena 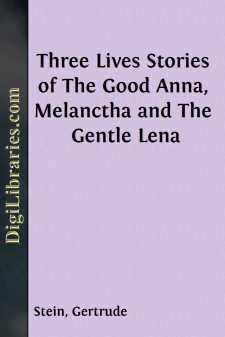 The tradesmen of Bridgepoint learned to dread the sound of "MissMathilda", for with that name the good Anna always conquered.

The strictest of the one price stores found that they could givethings for a little less, when the good Anna had fully said that "MissMathilda" could not pay so much and that she could buy it cheaper "byLindheims."

Lindheims was Anna's favorite store, for there they had bargain days, when flour and sugar were sold for a quarter of a cent less for a pound, and there the heads of the departments were all her friends and always managed to give her the bargain prices, even on other days.

Anna managed the whole little house for Miss Mathilda. It was a funny little house, one of a whole row of all the same kind that made a close pile like a row of dominoes that a child knocks over, for they were built along a street which at this point came down a steep hill. They were funny little houses, two stories high, with red brick fronts and long white steps.

This one little house was always very full with Miss Mathilda, an under servant, stray dogs and cats and Anna's voice that scolded, managed, grumbled all day long.

"Sallie! can't I leave you alone a minute but you must run to the door to see the butcher boy come down the street and there is Miss Mathilda calling for her shoes. Can I do everything while you go around always thinking about nothing at all? If I ain't after you every minute you would be forgetting all, the time, and I take all this pains, and when you come to me you was as ragged as a buzzard and as dirty as a dog. Go and find Miss Mathilda her shoes where you put them this morning."

The good Anna had high ideals for canine chastity and discipline. The three regular dogs, the three that always lived with Anna, Peter and old Baby, and the fluffy little Rags, who was always jumping up into the air just to show that he was happy, together with the transients, the many stray ones that Anna always kept until she found them homes, were all under strict orders never to be bad one with the other.

A sad disgrace did once happen in the family. A little transient terrier for whom Anna had found a home suddenly produced a crop of pups. The new owners were certain that this Foxy had known no dog since she was in their care. The good Anna held to it stoutly that her Peter and her Rags were guiltless, and she made her statement with so much heat that Foxy's owners were at last convinced that these results were due to their neglect.

"You bad dog," Anna said to Peter that night, "you bad dog."

"Peter was the father of those pups," the good Anna explained to Miss Mathilda, "and they look just like him too, and poor little Foxy, they were so big that she could hardly have them, but Miss Mathilda, I would never let those people know that Peter was so bad."

Periods of evil thinking came very regularly to Peter and to Rags and to the visitors within their gates....