Three Elephant Power and Other Stories

by A. B. (Andrew Barton) Paterson 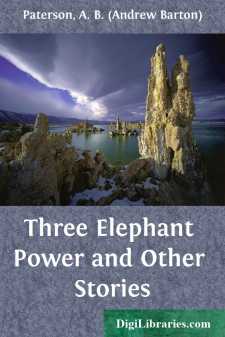 "Them things," said Alfred the chauffeur, tapping the speed indicator with his fingers, "them things are all right for the police. But, Lord, you can fix 'em up if you want to. Did you ever hear about Henery, that used to drive for old John Bull—about Henery and the elephant?"

Alfred was chauffeur to a friend of mine who owned a very powerful car. Alfred was part of that car. Weirdly intelligent, of poor physique, he might have been any age from fifteen to eighty. His education had been somewhat hurried, but there was no doubt as to his mechanical ability. He took to a car like a young duck to water. He talked motor, thought motor, and would have accepted—I won't say with enthusiasm, for Alfred's motto was 'Nil admirari'—but without hesitation, an offer to drive in the greatest race in the world. He could drive really well, too; as for belief in himself, after six months' apprenticeship in a garage he was prepared to vivisect a six-cylinder engine with the confidence of a diplomaed bachelor of engineering.

Barring a tendency to flash driving, and a delight in persecuting slow cars by driving just in front of them and letting them come up and enjoy his dust, and then shooting away again, he was a respectable member of society. When his boss was in the car he cloaked the natural ferocity of his instincts; but this day, with only myself on board, and a clear run of a hundred and twenty miles up to the station before him, he let her loose, confident that if any trouble occurred I would be held morally responsible.

As we flew past a somnolent bush pub, Alfred, whistling softly, leant forward and turned on a little more oil.

"You never heard about Henery and the elephant?" he said. "It was dead funny. Henery was a bushwacker, but clean mad on motorin'. He was wood and water joey at some squatter's place until he seen a motor-car go past one day, the first that ever they had in the districk.

"So he comes to town and gets a job off Miles that had that garage at the back of Allison's. An old cove that they called John Bull—I don't know his right name, he was a fat old cove—he used to come there to hire cars, and Henery used to drive him. And this old John Bull he had lots of stuff, so at last he reckons he's going to get a car for himself, and he promises Henery a job to drive it. A queer cove this Henery was—half mad, I think, but the best hand with a car ever I see."

While he had been talking we topped a hill, and opened up a new stretch of blue-grey granite-like road. Down at the foot of the hill was a teamster's waggon in camp; the horses in their harness munching at their nose-bags, while the teamster and a mate were boiling a billy a little off to the side of the road. There was a turn in the road just below the waggon which looked a bit sharp, so of course Alfred bore down on it like a whirlwind. The big stupid team-horses huddled together and pushed each other awkwardly as we passed....