Three at Table The Lady of the Barge and Others, Part 12. 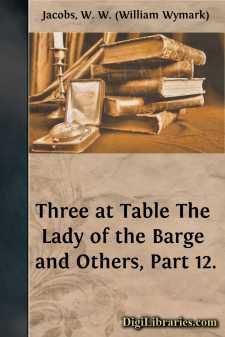 The talk in the coffee-room had been of ghosts and apparitions, and nearly everybody present had contributed his mite to the stock of information upon a hazy and somewhat thread-bare subject. Opinions ranged from rank incredulity to childlike faith, one believer going so far as to denounce unbelief as impious, with a reference to the Witch of Endor, which was somewhat marred by being complicated in an inexplicable fashion with the story of Jonah.

"Talking of Jonah," he said solemnly, with a happy disregard of the fact that he had declined to answer several eager questions put to him on the subject, "look at the strange tales sailors tell us."

"I wouldn't advise you to believe all those," said a bluff, clean-shaven man, who had been listening without speaking much. "You see when a sailor gets ashore he's expected to have something to tell, and his friends would be rather disappointed if he had not."

"It's a well-known fact," interrupted the first speaker firmly, "that sailors are very prone to see visions."

"They are," said the other dryly, "they generally see them in pairs, and the shock to the nervous system frequently causes headache next morning."

"You never saw anything yourself?" suggested an unbeliever.

"Man and boy," said the other, "I've been at sea thirty years, and the only unpleasant incident of that kind occurred in a quiet English countryside."

"And that?" said another man.

"I was a young man at the time," said the narrator, drawing at his pipe and glancing good-humouredly at the company. "I, had just come back from China, and my own people being away I went down into the country to invite myself to stay with an uncle. When I got down to the place I found it closed and the family in the South of France; but as they were due back in a couple of days I decided to put up at the Royal George, a very decent inn, and await their return.

"The first day I passed well enough; but in the evening the dulness of the rambling old place, in which I was the only visitor, began to weigh upon my spirits, and the next morning after a late breakfast I set out with the intention of having a brisk day's walk.

"I started off in excellent spirits, for the day was bright and frosty, with a powdering of snow on the iron-bound roads and nipped hedges, and the country had to me all the charm of novelty. It was certainly flat, but there was plenty of timber, and the villages through which I passed were old and picturesque.

"I lunched luxuriously on bread and cheese and beer in the bar of a small inn, and resolved to go a little further before turning back. When at length I found I had gone far enough, I turned up a lane at right angles to the road I was passing, and resolved to find my way back by another route. It is a long lane that has no turning, but this had several, each of which had turnings of its own, which generally led, as I found by trying two or three of them, into the open marshes. Then, tired of lanes, I resolved to rely upon the small compass which hung from my watch chain and go across country home....