Thoughts on religion at the front 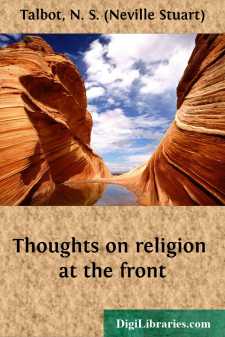 I send out this little and fragmentary book with the consciousness that it calls for apology. I have had to write it hastily during a short period of leave. Yet it touches upon great subjects which deserve the reverence of leisurely writing. Ought I not, then, to have waited for the leisure of days after the war? I think not. Such days may never come. And, in any case, now is the time for the Church to think intently about the war and its issues, and to learn from them. The Church is far more than a department of 'the services,' the resources of which it is convenient to mobilise as so much more munition of war. She is the perpetual protagonist in the world of the Kingdom of God. War for her, if for nobody else, should be an apocalypse, that is, a vision of realities for which at all times she is bound to fight, of which, nevertheless, she is apt to lose sight during the engrossments of peace. It is as lit up by the cruel light of war's conflagrations that the things concerning the Kingdom must be seized anew. If anybody has thoughts which he feels he must share with others, he should not postpone doing so. He should communicate his thoughts to others in order that he may learn from their comments and criticism. I can claim, whilst asking pardon for whatever may offend in them, that the thoughts represented by the following pages have not been come by hastily, but have been growing in my mind during the long months at the front since the beginning of the war. They have, so to say, been hammered out as metal upon the anvil of war.

They are thoughts about religion. Nothing is so important as religion; nothing is more potent than true ideas in religion. Deep fountains of real religion—of simple and unself-prizing faith—have been unsealed by the convulsion of war. Yet this religion is weak in ideas, and some of the ideas with which it is bound up are wrong ideas. Men of our race are very sure that it matters more what a man is than what he thinks. British religion is deep and rich, but it is, characteristically, deeper and richer in what it is than in what it knows itself to be. It sorely needs a mind of strong and compelling conviction. If these pages were to help ever so few readers towards being possessed anew of the truth of the Gospel of God in Christ, their appearance would be justified.

I have written, perhaps, as one who dreads saying 'Peace, where there is no peace.' I would rather err on the side of emphasising criticism and difficulty than the other way. There is, indeed, little room for complacency in a Christian, still less in an English Churchman, at the front. Yet in 'padres' hope and expectation should predominate, and these as based less upon results achieved than upon the mutual understanding, respect, and indeed affection which increasingly unite them to the men whom they would serve. And in them, too, if they are 'C. of E.,' there should be growing, along with an unevasive discontent, a sanguine loyalty to their mother Church. For all that she now means so little to so many she will yet win a more than nominal allegiance from many of her wandering children. For there is in her, beneath the surface of her sluggish confusion, a living heart and candid mind, upon which is being written afresh the good news in Christ. She is being vivified, as perhaps no other part of Christendom, into readiness for the future.

'And the loftiness of man shall be bowed down, and the haughtiness of men shall be brought low: and the Lord alone shall be exalted in that day....