Thoughts on Man, His Nature, Productions and Discoveries Interspersed with Some Particulars Respecting the Author 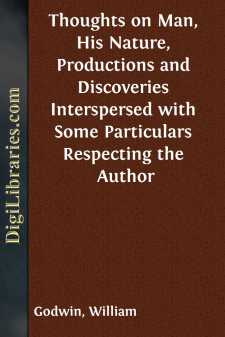 Add to My Favorites
Published: 9 years ago
Downloads: 98
Rating: (0 Votes)

In the ensuing volume I have attempted to give a defined and permanent form to a variety of thoughts, which have occurred to my mind in the course of thirty-four years, it being so long since I published a volume, entitled, the Enquirer,—thoughts, which, if they have presented themselves to other men, have, at least so far as I am aware, never been given to the public through the medium of the press. During a part of this period I had remained to a considerable degree unoccupied in my character of an author, and had delivered little to the press that bore my name.—And I beg the reader to believe, that, since I entered in 1791 upon that which may be considered as my vocation in life, I have scarcely in any instance contributed a page to any periodical miscellany.

My mind has been constitutionally meditative, and I should not have felt satisfied, if I had not set in order for publication these special fruits of my meditations. I had entered upon a certain career; and I held it for my duty not to abandon it.

One thing further I feel prompted to say. I have always regarded it as my office to address myself to plain men, and in clear and unambiguous terms. It has been my lot to have occasional intercourse with some of those who consider themselves as profound, who deliver their oracles in obscure phraseology, and who make it their boast that few men can understand them, and those few only through a process of abstract reflection, and by means of unwearied application.

To this class of the oracular I certainly did not belong. I felt that I had nothing to say, that it should be very difficult to understand. I resolved, if I could help it, not to "darken counsel by words without knowledge." This was my principle in the Enquiry concerning Political Justice. And I had my reward. I had a numerous audience of all classes, of every age, and of either sex. The young and the fair did not feel deterred from consulting my pages.

It may be that that book was published in a propitious season. I am told that nothing coming from the press will now be welcomed, unless it presents itself in the express form of amusement. He who shall propose to himself for his principal end, to draw aside in one particular or another the veil from the majesty of intellectual or moral truth, must lay his account in being received with little attention.

I have not been willing to believe this: and I publish my speculations accordingly. I have aimed at a popular, and (if I could reach it) an interesting style; and, if I am thrust aside and disregarded, I shall console myself with believing that I have not neglected what it was in my power to achieve.

One characteristic of the present publication will not fail to offer itself to the most superficial reader. I know many men who are misanthropes, and profess to look down with disdain on their species. My creed is of an opposite character. All that we observe that is best and most excellent in the intellectual world, is man: and it is easy to perceive in many cases, that the believer in mysteries does little more, than dress up his deity in the choicest of human attributes and qualifications....