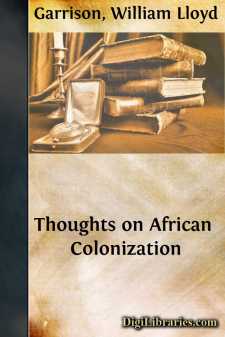 I dedicate this work to my countrymen, in whose intelligence, magnanimity and humanity I place the utmost reliance. Although they have long suffered themselves to be swayed by a prejudice as unmanly as it is wicked, and have departed widely from the golden rule of the gospel, in their treatment of the people of color, to suppose that they will always be the despisers and persecutors of this unfortunate class is, in my opinion, to libel their character. A change in their feelings and sentiments is already visible—a change which promises, ere long, to redeem their character from the bloody stains which slavery has cast upon it, and to release the prisoner from his chains. May they be ashamed to persist in a mean and thievish course of conduct, and afraid to quarrel with the workmanship of God! May a righteous indignation be kindled in their breasts against a combination which is holding them up, for the scorn and contempt of other nations, as incorrigible oppressors, whom neither self-respect, nor the opinions of mankind, nor the fear of God, can bring to repentance! Their duty is plain, and it may easily be done. Slavery must be overthrown either by their own moral strength, or by the physical strength of the slaves. Let them imitate the example of the people of Great Britain, by seeking the immediate overthrow of the horrid system. Let a National Anti-Slavery Society be immediately organized, the object of which shall be, to quicken and consolidate the moral influence of the nation, so that Congress and the State Legislatures may be burdened with petitions for the removal of the evil—to scatter tracts, like rain-drops, over the land, on the subject of slavery—to employ active and eloquent agents to plead the cause incessantly, and to form auxiliary societies—to encourage planters to cultivate their lands by freemen, by offering large premiums; to promote education and the mechanical arts among the free people of color, and to recover their lost rights. Religious professors, of all denominations, must bear unqualified testimony against slavery. They must not support, they must not palliate it. No slaveholder ought to be embraced within the pale of a christian church; consequently, the churches must be purified 'as by fire.' Slavery in the District of Columbia is sustained in our national capacity: it ought, therefore, to be prostrated at a blow. The clause in the Constitution should be erased, which tolerates, greatly to the detriment and injustice of the non-slaveholding States, a slave representation in Congress. Why should property be represented at the impoverished south, and not at the opulent north?

To impair the force of this exposition, the ardent advocates of the Colonization Society will undoubtedly attempt to evade the ground of controversy, and lead uncautious minds astray in a labyrinth of sophistry. But the question is not, whether the climate of Africa is salubrious, nor whether the mortality among the emigrants has been excessive, nor whether the colony is in a prosperous condition, nor whether the transportation of our whole colored population can be effected in thirty years or three centuries, nor whether any slaves have been emancipated on condition of banishment; but whether the doctrines and principles of the Society accord with the doctrines and principles of the gospel, whether slaveholders are the just proprietors of their slaves, whether it is not the sacred duty of the nation to abolish the system of slavery now, and to recognise the people of color as brethren and countrymen who have been unjustly treated and covered with unmerited shame. This is the question—and the only question.

With such a mass of evidence before them, of the pernicious, cruel and delusive character of the American Colonization Society, I leave the patriot, the philanthropist and the christian to judge of the fitness of the following inflated and presumptuous assertions of its advocates:—'The plan is of heavenly origin, against which the gates of hell shall never prevail'—'a circle of philanthropy, every segment of which tells and testifies to the beneficence of the whole'—'addressing its claims alike to the patriot, and the christian, it being emphatically the cause of liberty, of humanity, of religion'—'so full of benevolence and the hallowed impulses of Heaven's own mercy, that one might, with the propriety of truth, compare its radiant influences to a rainbow, insufferably bright, spanning the sombre clouds of human wrong, that have accumulated on the horizon of our country's prosperity, and beating back, with calm and heavenly power, the blackening storm that always threatens, in growling thunders, a heavy retribution'—'that citizen of the United States who lifts a finger to retard this institution, nay, that man who does not use his persevering efforts to promote its benevolent object, fails, in our opinion, to discharge his duty to his God and his country'—'nothing but a distinct knowledge and a calm consideration of the facts in the case, is wanting to make every man of common intelligence, common patriotism, and common humanity, the earnest friend of the Colonization Society'!!

There is one important consideration, which, owing to the contractedness of my limits, I have omitted to enforce in this work. It is this: the serious injury which our interests must inevitably suffer by the removal of our colored population. Their labor is indispensably necessary and extremely valuable. By whom shall the plantations at the south be cultivated but by them? It is universally conceded that they can resist the intensity of a southern sun, and endure the fatigues attendant on the cultivation of rice, cotton, tobacco and sugar-cane, better than white laborers: at least, their bodies are now inured to this employment. I do not believe that any equivalent would induce the planters to part with their services, or white laborers to occupy their places. In the great cities, and in various parts of the southern States, free persons of color constitute a laborious and useful class. In a pecuniary point of view, the banishment of one-sixth of our population,—of those whom we specially need,—would be an act of suicide....