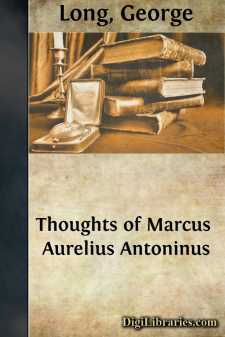 The youth was most carefully brought up. He thanks the gods () that he had good grandfathers, good parents, a good sister, good teachers, good associates, good kinsmen and friends, nearly everything good. He had the happy fortune to witness the example of his uncle and adoptive father Antoninus Pius, and he has recorded in his word (; ) the virtues of the excellent man and prudent ruler. Like many young Romans he tried his hand at poetry and studied rhetoric. Herodes Atticus and M. Cornelius Fronto were his teachers in eloquence. There are extant letters between Fronto and Marcus, which show the great affection of the pupil for the master, and the master's great hopes of his industrious pupil. M. Antoninus mentions Fronto () among those to whom he was indebted for his education.

M. Cornelii Frontonis Reliquiae, Berlin, 1816. There are a few letters between Fronto and Antoninus Pius.

When he was eleven years old, he assumed the dress of philosophers, something plain and coarse, became a hard student, and lived a most laborious, abstemious life, even so far as to injure his health. Finally, he abandoned poetry and rhetoric for philosophy, and he attached himself to the sect of the Stoics. But he did not neglect the study of law, which was a useful preparation for the high place which he was designed to fill. His teacher was L. Volusianus Maecianus, a distinguished jurist. We must suppose that he learned the Roman discipline of arms, which was a necessary part of the education of a man who afterwards led his troops to battle against a warlike race.

Antoninus has recorded in his first book the names of his teachers, and the obligations which he owed to each of them. The way in which he speaks of what he learned from them might seem to savor of vanity or self-praise, if we look carelessly at the way in which he has expressed himself; but if any one draws this conclusion, he will be mistaken. Antoninus means to commemorate the merits of his several teachers, what they taught, and what a pupil might learn from them. Besides, this book, like the eleven other books, was for his own use; and if we may trust the note at the end of the first book, it was written during one of M. Antoninus' campaigns against the Quadi, at a time when the commemoration of the virtues of his illustrious teachers might remind him of their lessons and the practical uses which he might derive from them.

Among his teachers of philosophy was Sextus of Chaeroneia, a grandson of Plutarch. What he learned from this excellent man is told by himself (). His favorite teacher was Q. Junius Rusticus (), a philosopher, and also a man of practical good sense in public affairs. Rusticus was the adviser of Antoninus after he became emperor. Young men who are destined for high places are not often fortunate in those who are about them, their companions and teachers; and I do not know any example of a young prince having had an education which can be compared with that of M. Antoninus. Such a body of teachers distinguished by their acquirements and their character will hardly be collected again; and as to the pupil, we have not had one like him since....