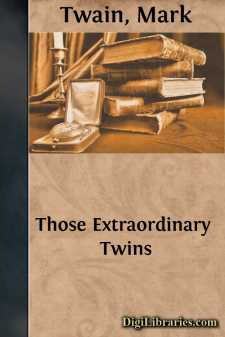 A man who is not born with the novel-writing gift has a troublesome time of it when he tries to build a novel. I know this from experience. He has no clear idea of his story; in fact he has no story. He merely has some people in his mind, and an incident or two, also a locality. He knows these people, he knows the selected locality, and he trusts that he can plunge those people into those incidents with interesting results. So he goes to work. To write a novel? No—that is a thought which comes later; in the beginning he is only proposing to tell a little tale; a very little tale; a six-page tale. But as it is a tale which he is not acquainted with, and can only find out what it is by listening as it goes along telling itself, it is more than apt to go on and on and on till it spreads itself into a book. I know about this, because it has happened to me so many times.

And I have noticed another thing: that as the short tale grows into a long tale, the original intention (or motif) is apt to get abolished and find itself superseded by a quite different one. It was so in the case of a magazine sketch which I once started to write—a funny and fantastic sketch about a prince and a pauper; it presently assumed a grave cast of its own accord, and in that new shape spread itself out into a book. Much the same thing happened with "Pudd'nhead Wilson." I had a sufficiently hard time with that tale, because it changed itself from a farce to a tragedy while I was going along with it—a most embarrassing circumstance. But what was a great deal worse was, that it was not one story, but two stories tangled together; and they obstructed and interrupted each other at every turn and created no end of confusion and annoyance. I could not offer the book for publication, for I was afraid it would unseat the reader's reason. I did not know what was the matter with it, for I had not noticed, as yet, that it was two stories in one. It took me months to make that discovery. I carried the manuscript back and forth across the Atlantic two or three times, and read it and studied over it on shipboard; and at last I saw where the difficulty lay. I had no further trouble. I pulled one of the stories out by the roots, and left the other one—a kind of literary Caesarean operation.

Would the reader care to know something about the story which I pulled out? He has been told many a time how the born-and-trained novelist works. Won't he let me round and complete his knowledge by telling him how the jack-leg does it?

Originally the story was called "Those Extraordinary Twins." I meant to make it very short. I had seen a picture of a youthful Italian "freak" or "freaks" which was—or which were—on exhibition in our cities—a combination consisting of two heads and four arms joined to a single body and a single pair of legs—and I thought I would write an extravagantly fantastic little story with this freak of nature for hero—or heroes—a silly young miss for heroine, and two old ladies and two boys for the minor parts. I lavishly elaborated these people and their doings, of course. But the tale kept spreading along, and spreading along, and other people got to intruding themselves and taking up more and more room with their talk and their affairs. Among them came a stranger named Pudd'nhead Wilson, and a woman named Roxana; and presently the doings of these two pushed up into prominence a young fellow named Tom Driscoll, whose proper place was away in the obscure background. Before the book was half finished those three were taking things almost entirely into their own hands and working the whole tale as a private venture of their own—a tale which they had nothing at all to do with, by rights.

When the book was finished and I came to look around to see what had become of the team I had originally started out with—Aunt Patsy Cooper, Aunt Betsy Hale, the two boys, and Rowena the light-weight heroine—they were nowhere to be seen; they had disappeared from the story some time or other....