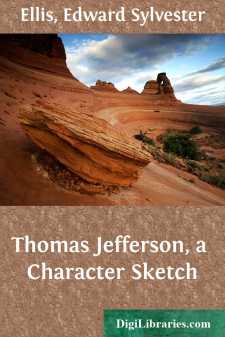 No golden eagle, warm from the stamping press of the mint, is more sharply impressed with its image and superscription than was the formative period of our government by the genius and personality of Thomas Jefferson.

Standing on the threshold of the nineteenth century, no one who attempted to peer down the shadowy vista, saw more clearly than he the possibilities, the perils, the pitfalls and the achievements that were within the grasp of the Nation. None was inspired by purer patriotism. None was more sagacious, wise and prudent, and none understood his countrymen better.

By birth an aristocrat, by nature he was a democrat. The most learned man that ever sat in the president's chair, his tastes were the simple ones of a farmer. Surrounded by the pomp and ceremony of Washington and Adams' courts, his dress was homely. He despised titles, and preferred severe plainness of speech and the sober garb of the Quakers.

"What is the date of your birth, Mr. President?" asked an admirer.

"Of what possible concern is that to you?" queried the President in turn.

"We wish to give it fitting celebration."

"For that reason, I decline to enlighten you; nothing could be more distasteful to me than what you propose, and, when you address me, I shall be obliged if you will omit the 'Mr.'"

If we can imagine Washington doing so undignified a thing as did President Lincoln, when he first met our present Secretary of State, (John Sherman) and compared their respective heights by standing back to back, a sheet of paper resting on the crowns of Washington and Jefferson would have lain horizontal and been six feet two inches from the earth, but the one was magnificent in physique, of massive frame and prodigious strength,—the other was thin, wiry, bony, active, but with muscles of steel, while both were as straight as the proverbial Indian arrow.

Jefferson's hair was of sandy color, his cheeks ruddy, his eyes of a light hazel, his features angular, but glowing with intelligence and neither could lay any claim to the gift of oratory.

Washington lacked literary ability, while in the hand of Jefferson, the pen was as masterful as the sword in the clutch of Saladin or Godfrey of Bouillon. Washington had only a common school education, while Jefferson was a classical scholar and could express his thoughts in excellent Italian, Spanish and French, and both were masters of their temper.

Jefferson was an excellent violinist, a skilled mathematician and a profound scholar. Add to all these his spotless integrity and honor, his statesmanship, and his well curbed but aggressive patriotism, and he embodied within himself all the attributes of an ideal president of the United States.

In the colonial times, Virginia was the South and Massachusetts the North. The other colonies were only appendages. The New York Dutchman dozed over his beer and pipe, and when the other New England settlements saw the Narragansetts bearing down upon them with upraised tomahawks, they ran for cover and yelled to Massachusetts to save them.

Clayborne fired popguns at Lord Baltimore, and the Catholic and Protestant Marylanders enacted Toleration Acts, and then chased one another over the border, with some of the fugitives running all the way to the Carolinas, where the settlers were perspiring over their efforts in installing new governors and thrusting them out again, in the hope that a half-fledged statesman would turn up sometime or other in the shuffle....