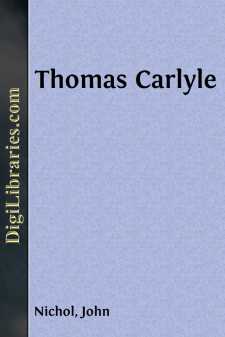 Add to My Favorites
Published: 8 years ago
Downloads: 51
Rating: (0 Votes)

Four Scotchmen, born within the limits of the same hundred years, all in the first rank of writers, if not of thinkers, represent much of the spirit of four successive generations. They are leading links in an intellectual chain.

DAVID HUME (1711-1776) remains the most salient type in our island of the scepticism, half conservative, half destructive, but never revolutionary, which marked the third quarter of the eighteenth century. He had some points of intellectual contact with Voltaire, though substituting a staid temper and passionless logic for the incisive brilliancy of a mocking Mercury; he had no relation, save an unhappy personal one, to Rousseau.

ROBERT BURNS (1759-1796), last of great lyrists inspired by a local genius, keenest of popular satirists, narrative poet of the people, spokesman of their higher as of their lower natures, stood on the verge between two eras. Half Jacobite, nursling of old minstrelsy, he was also half Jacobin, an early-born child of the upheaval that closed the century; as essentially a foe of Calvinism as Hume himself. Master musician of his race, he was, as Thomas Campbell notes, severed, for good and ill, from his fellow Scots, by an utter want of their protecting or paralysing caution.

WALTER SCOTT (1771-1832), broadest and most generous, if not loftiest of the group—"no sounder piece of British manhood," says Carlyle himself in his inadequate review, "was put together in that century"—the great revivalist of the mediaeval past, lighting up its scenes with a magic glamour, the wizard of northern tradition, was also, like Burns, the humorist of contemporary life. Dealing with Feudal themes, but in the manner of the Romantic school, he was the heir of the Troubadours, the sympathetic peer of Byron, and in his translation of Goetz von Berlichingen he laid the first rafters of our bridge to Germany.

THOMAS CARLYLE (1795-1881) is on the whole the strongest, though far from the finest spirit of the age succeeding—an age of criticism threatening to crowd creation out, of jostling interests and of surging streams, some of which he has striven to direct, more to stem. Even now what Mill twenty-five years ago wrote of Coleridge is still true of Carlyle: "The reading public is apt to be divided between those to whom his views are everything and those to whom they are nothing." But it is possible to extricate from a mass of often turbid eloquence the strands of his thought and to measure his influence by indicating its range.

Travellers in the Hartz, ascending the Brocken, are in certain atmospheres startled by the apparition of a shadowy figure,—a giant image of themselves, thrown on the horizon by the dawn. Similar is the relation of Carlyle to the common types of his countrymen. Burns, despite his perfervid patriotism, was in many ways "a starry stranger." Carlyle was Scotch to the core and to the close, in every respect a macrocosm of the higher peasant class of the Lowlanders. Saturated to the last with the spirit of a dismissed creed, he fretted in bonds from which he could never get wholly free....