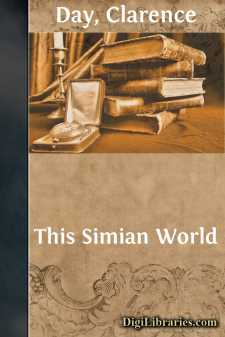 Last Sunday, Potter took me out driving along upper Broadway, where those long rows of tall new apartment houses were built a few years ago. It was a mild afternoon and great crowds of people were out. Sunday afternoon crowds. They were not going anywhere,--they were just strolling up and down, staring at each other, and talking. There were thousands and thousands of them.

I didn't know what he meant. When he added, "Why, these crowds," I turned and asked, "Why, what about them?" I wasn't sure whether he had an idea or a headache.

"Other creatures don't do it," he replied, with a discouraged expression. "Are any other beings ever found in such masses, but vermin? Aimless, staring, vacant-minded,--look at them! I can get no sense whatever of individual worth, or of value in men as a race, when I see them like this. It makes one almost despair of civilization."

I thought this over for awhile, to get in touch with his attitude. I myself feel differently at different times about us human-beings: sometimes I get pretty indignant when we are attacked (for there is altogether too much abuse of us by spectator philosophers) and yet at other times I too feel like a spectator, an alien: but even then I had never felt so alien or despairing as Potter. I cast about for the probable cause of our difference. "Let's remember," I said, "it's a simian civilization."

Potter was staring disgustedly at some vaudeville sign-boards.

"Yes," I said, "those for example are distinctively simian. Why should you feel disappointment at something inevitable?" And I went on to argue that it wasn't as though we were descended from eagles for instance, instead of (broadly speaking) from ape-like or monkeyish beings. Being of simian stock, we had simian traits. Our development naturally bore the marks of our origin. If we had inherited our dispositions from eagles we should have loathed vaudeville. But as cousins of the Bandarlog, we loved it. What could you expect?

If we had been made directly from clay, the way it says in the Bible, and had therefore inherited no intermediate characteristics,--if a god, or some principle of growth, had gone that way to work with us, he or it might have molded us into much more splendid forms.

But considering our simian descent, it has done very well. The only people who are disappointed in us are those who still believe that clay story. Or who--unconsciously--still let it color their thinking.

There certainly seems to be a power at work in the world, by virtue of which every living thing grows and develops. And it tends toward splendor. Seeds become trees, and weak little nations grow great. But the push or the force that is doing this, the yeast as it were, has to work in and on certain definite kinds of material. Because this yeast is in us, there may be great and undreamed of possibilities awaiting mankind; but because of our line of descent there are also queer limitations.