Thirty Years In Hell Or, From Darkness to Light 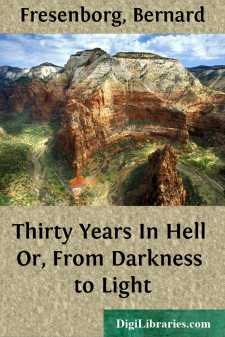 My parents were Catholics, and for this reason I suppose, is why I became a Catholic Priest.

I was born in Germany, in 1847, thus you see I am now almost what the world would call an old man—56 years old.

A few years ago, I was of the opinion that my life had been well spent, but to-day I firmly believe that the major part of my life has been spent in erroneous doctrines and nonsensical teachings, as the broad light of wisdom and independent thought has penetrated the dark resources of my bewildered conception of right, and has caused me to look upon things in general in an intelligent manner. Therefore, I feel that my youth and the vigorous years of my manhood have been spent in what one might term idolatry.

From this time forward I am going to endeavor to undo, as near as possible, what I have helped to accomplish in the past.

My ancestors came from Sweden, but becoming tired of religions warfare under Gustavus Adolphus, King of Sweden, they settled in a Catholic colony in Germany, in the southern part of the Dukedom of Oldenburg, near the River Haase.

The reader, if he be a Protestant, is familiar with Protestant affiliations, and I am led to believe belongs to one of the many Protestant denominations, known under the head of Methodist, Baptist, Christian, United Brethren, Presbyterian, Free Baptist, or some one of the many other Protestant Churches. Therefore you can easily see why it was that I became a Catholic, as I was taught it from my infancy.

My father, like his ancestors, lived in Essen, Oldenburg. Essen is a town of considerable trade in grain, in fine Oldenburg horses and Holstein cows, in fact, it is a town noted for its fine stock.

The beautiful town of Essen has a considerable population. Two fine rivers, which unite their rapid waters in its very midst, make it an ideal spot to live.

My relatives were among the first and best families of the Dukedom. These families were by name Dickmann, Meyer, Junker and Mohlenkamp, who are at the head of the intellectual and material movements of that place. They are all related by marriage and intermarriage to the Fresenborgs. My parents had ten children. This, however, may not interest the reader, so I will confine myself to my own biography.

The school to which I was sent was one of the leading schools and had a world-wide reputation, especially of sending many scholars and students to the gymnasium and afterwards to universities for different branches of sciences.

It seems as though all of those who attended this school became successful in their individual careers, as lawyers, doctors or some other of the chosen avocations of life.

I was raised, I might say, under the walls of the free City of Bremen, and was inspired with the idea of freedom, and this, perhaps, may be the reason why, when I have come to be an old man, that I have shaken off this eternal bondage of Catholicism and launched my boat so late in life upon the broad waters of Protestant freedom....