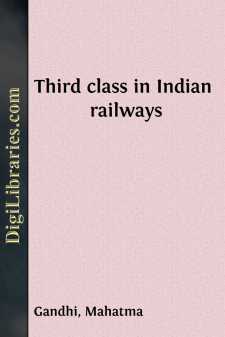 I have now been in India for over two years and a half after my return from South Africa. Over one quarter of that time I have passed on the Indian trains travelling third class by choice. I have travelled up north as far as Lahore, down south up to Tranquebar, and from Karachi to Calcutta. Having resorted to third class travelling, among other reasons, for the purpose of studying the conditions under which this class of passengers travel, I have naturally made as critical observations as I could. I have fairly covered the majority of railway systems during this period. Now and then I have entered into correspondence with the management of the different railways about the defects that have come under my notice. But I think that the time has come when I should invite the press and the public to join in a crusade against a grievance which has too long remained unredressed, though much of it is capable of redress without great difficulty.

On the 12th instant I booked at Bombay for Madras by the mail train and paid Rs. 13-9. It was labelled to carry 22 passengers. These could only have seating accommodation. There were no bunks in this carriage whereon passengers could lie with any degree of safety or comfort. There were two nights to be passed in this train before reaching Madras. If not more than 22 passengers found their way into my carriage before we reached Poona, it was because the bolder ones kept the others at bay. With the exception of two or three insistent passengers, all had to find their sleep being seated all the time. After reaching Raichur the pressure became unbearable. The rush of passengers could not be stayed. The fighters among us found the task almost beyond them. The guards or other railway servants came in only to push in more passengers.

A defiant Memon merchant protested against this packing of passengers like sardines. In vain did he say that this was his fifth night on the train. The guard insulted him and referred him to the management at the terminus. There were during this night as many as 35 passengers in the carriage during the greater part of it. Some lay on the floor in the midst of dirt and some had to keep standing. A free fight was, at one time, avoided only by the intervention of some of the older passengers who did not want to add to the discomfort by an exhibition of temper.

On the way passengers got for tea tannin water with filthy sugar and a whitish looking liquid mis-called milk which gave this water a muddy appearance. I can vouch for the appearance, but I cite the testimony of the passengers as to the taste.

Not during the whole of the journey was the compartment once swept or cleaned. The result was that every time you walked on the floor or rather cut your way through the passengers seated on the floor, you waded through dirt.

The closet was also not cleaned during the journey and there was no water in the water tank.

Refreshments sold to the passengers were dirty-looking, handed by dirtier hands, coming out of filthy receptacles and weighed in equally unattractive scales....