Things as They Are Mission Work in Southern India 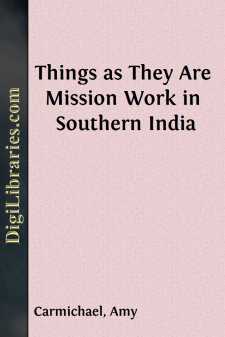 I have felt for many years that we missionaries were far too prone to dwell on what is called the "bright side of mission work." That it has a bright side no one can question. That it has a "dark" side some do question; but I for one, after thirty years of experience, know it to be just as true as the bright side is true. I have heard Miss Carmichael's book denounced as "pessimistic." Just what is meant by that I am not quite sure; but if it means that what she has written is untrue, then I am prepared to say that it is NOT pessimistic, for there is not a line of it that cannot be duplicated in this Telugu Mission. That she has painted a dark picture of Hindu life cannot be denied, but, since it is every word true, I rejoice that she had the courage to do what was so much needed, and yet what so many of us shrank from doing, "lest it should injure the cause."

This book, Things as They Are, meets a real need—it depicts a phase of mission work of which, as a rule, very little is heard. Every missionary can tell of cases where people have been won for Christ, and mention incidents of more than passing interest. Miss Carmichael is no exception, and could tell of not a few trophies of grace. The danger is, lest in describing such incidents the impression should be given that they represent the normal state of things, the reverse being the case. The people of India are not thirsting for the Gospel, nor "calling us to deliver their land from error's chain." The night is still one in which the "spiritual hosts of wickedness" have to be overcome before the captive can be set free. The writer has laid all interested in the extension of the Kingdom of God under a deep debt of obligation by such a graphic and accurate picture of the difficulties that have to be faced and the obstacles to be overcome. Counterparts of the incidents recorded can be found in other parts of South India, and there are probably few missionaries engaged in vernacular work who could not illustrate some of them from their own experience.

In Things as They Are are pictured, by camera and pen, some things in Southern India. The pen, as faithfully as the camera, has told the truth, and nothing but the truth.

The early chapters bring out with vivid, striking, almost startling reality the wayside hearers in India. One can almost see the devil plucking away the words as fast as they fall, and hear the opposers of the Gospel crying out against it.

Paul did not hesitate to write things as they were of the idolaters to whom he preached, even though the picture was very dark. It is all the more needful now, when so many are deceived and being deceived as to the true nature of idolatry, that people at home who give and pray should be told plainly that what Paul wrote of idolaters in Rome and Corinth is still true of idolaters in India.

Miss Carmichael has given only glances and glimpses, not full insights. Let those who think the picture she has drawn is too dark know that, if the whole truth were told, an evil spirit only could produce the pictures, and hell itself would be the only fit place in which to publish them, because in Christian lands eyes have not seen and ears have not heard of such things.

I have worked as Principal of a College for over seventeen years amongst the caste people of South India, and I entirely endorse Miss Carmichael's views as to the actual risks run by students and others desirous of breaking caste and being baptized. While the teaching of the Bible and English education generally have removed a great deal of prejudice, and greatly raised the ethical standard amongst a number of those who come under such influences, Hinduism as held and practised by the vast majority of caste people remains essentially unchanged....