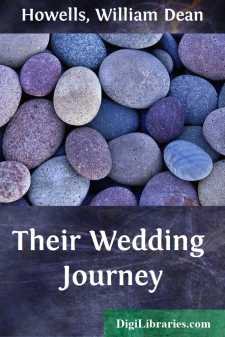 They first met in Boston, but the match was made in Europe, where they afterwards saw each other; whither, indeed, he followed her; and there the match was also broken off. Why it was broken off, and why it was renewed after a lapse of years, is part of quite a long love-story, which I do not think myself qualified to rehearse, distrusting my fitness for a sustained or involved narration; though I am persuaded that a skillful romancer could turn the courtship of Basil and Isabel March to excellent account. Fortunately for me, however, in attempting to tell the reader of the wedding-journey of a newly married couple, no longer very young, to be sure, but still fresh in the light of their love, I shall have nothing to do but to talk of some ordinary traits of American life as these appeared to them, to speak a little of well-known and easily accessible places, to present now a bit of landscape and now a sketch of character.

They had agreed to make their wedding-journey in the simplest and quietest way, and as it did not take place at once after their marriage, but some weeks later, it had all the desired charm of privacy from the outset.

"How much better," said Isabel, "to go now, when nobody cares whether you go or stay, than to have started off upon a wretched wedding-breakfast, all tears and trousseau, and had people wanting to see you aboard the cars. Now there will not be a suspicion of honey-moonshine about us; we shall go just like anybody else,—with a difference, dear, with a difference!" and she took Basil's cheeks between her hands. In order to do this, she had to ran round the table; for they were at dinner, and Isabel's aunt, with whom they had begun married life, sat substantial between them. It was rather a girlish thing for Isabel, and she added, with a conscious blush, "We are past our first youth, you know; and we shall not strike the public as bridal, shall we? My one horror in life is an evident bride."

Basil looked at her fondly, as if he did not think her at all too old to be taken for a bride; and for my part I do not object to a woman's being of Isabel's age, if she is of a good heart and temper. Life must have been very unkind to her if at that age she have not won more than she has lost. It seemed to Basil that his wife was quite as fair as when they met first, eight years before; but he could not help recurring with an inextinguishable regret to the long interval of their broken engagement, which but for that fatality they might have spent together, he imagined, in just such rapture as this. The regret always haunted him, more or less; it was part of his love; the loss accounted irreparable really enriched the final gain.

"I don't know," he said presently, with as much gravity as a man can whose cheeks are clasped between a lady's hands, "you don't begin very well for a bride who wishes to keep her secret. If you behave in this way, they will put us into the 'bridal chambers' at all the hotels. And the cars—they're beginning to have them on the palace-cars."

Just then a shadow fell into the room....