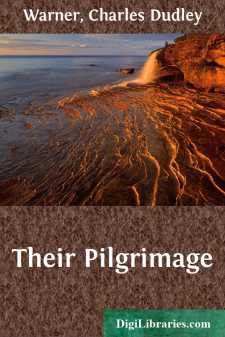 When Irene looked out of her stateroom window early in the morning of the twentieth of March, there was a softness and luminous quality in the horizon clouds that prophesied spring. The steamboat, which had left Baltimore and an arctic temperature the night before, was drawing near the wharf at Fortress Monroe, and the passengers, most of whom were seeking a mild climate, were crowding the guards, eagerly scanning the long facade of the Hygeia Hotel.

"It looks more like a conservatory than a hotel," said Irene to her father, as she joined him.

"I expect that's about what it is. All those long corridors above and below enclosed in glass are to protect the hothouse plants of New York and Boston, who call it a Winter Resort, and I guess there's considerable winter in it."

"But how charming it is—the soft sea air, the low capes yonder, the sails in the opening shining in the haze, and the peaceful old fort! I think it's just enchanting."

"I suppose it is. Get a thousand people crowded into one hotel under glass, and let 'em buzz around—that seems to be the present notion of enjoyment. I guess your mother'll like it."

And she did. Mrs. Benson, who appeared at the moment, a little flurried with her hasty toilet, a stout, matronly person, rather overdressed for traveling, exclaimed: "What a homelike looking place! I do hope the Stimpsons are here!"

"No doubt the Stimpsons are on hand," said Mr. Benson. "Catch them not knowing what's the right thing to do in March! They know just as well as you do that the Reynoldses and the Van Peagrims are here."

The crowd of passengers, alert to register and secure rooms, hurried up the windy wharf. The interior of the hotel kept the promise of the outside for comfort. Behind the glass-defended verandas, in the spacious office and general lounging-room, sea-coal fires glowed in the wide grates, tables were heaped with newspapers and the illustrated pamphlets in which railways and hotels set forth the advantages of leaving home; luxurious chairs invited the lazy and the tired, and the hotel-bureau, telegraph-office, railway-office, and post-office showed the new-comer that even in this resort he was still in the centre of activity and uneasiness. The Bensons, who had fortunately secured rooms a month in advance, sat quietly waiting while the crowd filed before the register, and took its fate from the courteous autocrat behind the counter. "No room," was the nearly uniform answer, and the travelers had the satisfaction of writing their names and going their way in search of entertainment. "We've eight hundred people stowed away," said the clerk, "and not a spot left for a hen to roost."

At the end of the file Irene noticed a gentleman, clad in a perfectly-fitting rough traveling suit, with the inevitable crocodile hand-bag and tightly-rolled umbrella, who made no effort to enroll ahead of any one else, but having procured some letters from the post-office clerk, patiently waited till the rest were turned away, and then put down his name....