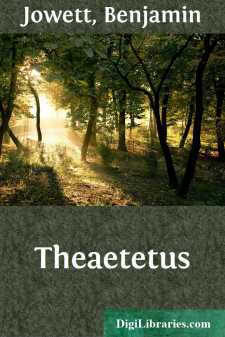 Some dialogues of Plato are of so various a character that their relation to the other dialogues cannot be determined with any degree of certainty. The Theaetetus, like the Parmenides, has points of similarity both with his earlier and his later writings. The perfection of style, the humour, the dramatic interest, the complexity of structure, the fertility of illustration, the shifting of the points of view, are characteristic of his best period of authorship. The vain search, the negative conclusion, the figure of the midwives, the constant profession of ignorance on the part of Socrates, also bear the stamp of the early dialogues, in which the original Socrates is not yet Platonized. Had we no other indications, we should be disposed to range the Theaetetus with the Apology and the Phaedrus, and perhaps even with the Protagoras and the Laches.

But when we pass from the style to an examination of the subject, we trace a connection with the later rather than with the earlier dialogues. In the first place there is the connexion, indicated by Plato himself at the end of the dialogue, with the Sophist, to which in many respects the Theaetetus is so little akin. (1) The same persons reappear, including the younger Socrates, whose name is just mentioned in the Theaetetus; (2) the theory of rest, which Socrates has declined to consider, is resumed by the Eleatic Stranger; (3) there is a similar allusion in both dialogues to the meeting of Parmenides and Socrates (Theaet., Soph.); and (4) the inquiry into not-being in the Sophist supplements the question of false opinion which is raised in the Theaetetus. (Compare also Theaet. and Soph. for parallel turns of thought.) Secondly, the later date of the dialogue is confirmed by the absence of the doctrine of recollection and of any doctrine of ideas except that which derives them from generalization and from reflection of the mind upon itself. The general character of the Theaetetus is dialectical, and there are traces of the same Megarian influences which appear in the Parmenides, and which later writers, in their matter of fact way, have explained by the residence of Plato at Megara. Socrates disclaims the character of a professional eristic, and also, with a sort of ironical admiration, expresses his inability to attain the Megarian precision in the use of terms. Yet he too employs a similar sophistical skill in overturning every conceivable theory of knowledge.

The direct indications of a date amount to no more than this: the conversation is said to have taken place when Theaetetus was a youth, and shortly before the death of Socrates. At the time of his own death he is supposed to be a full-grown man. Allowing nine or ten years for the interval between youth and manhood, the dialogue could not have been written earlier than 390, when Plato was about thirty-nine years of age. No more definite date is indicated by the engagement in which Theaetetus is said to have fallen or to have been wounded, and which may have taken place any time during the Corinthian war, between the years 390-387....