The Yukon Trail A Tale of the North 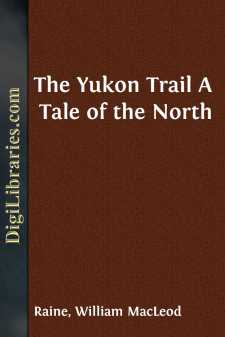 CHAPTER I GOING "IN"

The midnight sun had set, but in a crotch between two snow-peaks it had kindled a vast caldron from which rose a mist of jewels, garnet and turquoise, topaz and amethyst and opal, all swimming in a sea of molten gold. The glow of it still clung to the face of the broad Yukon, as a flush does to the soft, wrinkled cheek of a girl just roused from deep sleep.

Except for a faint murkiness in the air it was still day. There was light enough for the four men playing pinochle on the upper deck, though the women of their party, gossiping in chairs grouped near at hand, had at last put aside their embroidery. The girl who sat by herself at a little distance held a magazine still open on her lap. If she were not reading, her attitude suggested it was less because of the dusk than that she had surrendered herself to the spell of the mysterious beauty which for this hour at least had transfigured the North to a land all light and atmosphere and color.

Gordon Elliot had taken the boat at Pierre's Portage, fifty miles farther down the river. He had come direct from the creeks, and his impressions of the motley pioneer life at the gold-diggings were so vivid that he had found an isolated corner of the deck where he could scribble them in a notebook while still fresh.

But he had not been too busy to see that the girl in the wicker chair was as much of an outsider as he was. Plainly this was her first trip in. Gordon was a stranger in the Yukon country, one not likely to be over-welcome when it became known what his mission was. It may have been because he was out of the picture himself that he resented a little the exclusion of the young woman with the magazine. Certainly she herself gave no evidence of feeling about it. Her long-lashed eyes looked dreamily across the river to the glowing hills beyond. Not once did they turn with any show of interest to the lively party under the awning.

From where he was leaning against the deckhouse Elliot could see only a fine, chiseled profile shading into a mass of crisp, black hair, but some quality in the detachment of her personality stimulated gently his imagination. He wondered who she could be. His work had taken him to frontier camps before, but he could not place her as a type. The best he could do was to guess that she might be the daughter of some territorial official on her way in to join him.

A short, thick-set man who had ridden down on the stage with Elliot to Pierre's Portage drifted along the deck toward him. He wore the careless garb of a mining man in a country which looks first to comfort.

"Bound for Kusiak?" he asked, by way of opening conversation.

The miner nodded toward the group under the awning. "That bunch lives at Kusiak. They've got on at different places the last two or three days—except Selfridge and his wife, they've been out. Guess you can tell that from hearing her talk—the little woman in red with the snappy black eyes. She's spillin' over with talk about the styles in New York and the cabarets and the new shows....