The Youth of Goethe 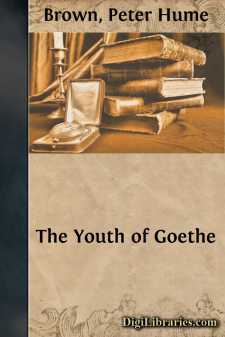 "Generally speaking," Goethe has himself said, "the most important period in the life of an individual is that of his development—the period which, in my case, breaks off with the detailed narrative of Dichtung und Wahrheit." In reality, as we know, there is no complete breach at any point in the lives of either nations or individuals. But if in the life of Goethe we are to fix upon a dividing point, it is his departure from Frankfort and his permanent settlement in Weimar in his twenty-seventh year. Considered externally, that change of his surroundings is the most obvious event in his career, and for the world at large marks its division into two well-defined periods. In relation to his inner development his removal from Frankfort to Weimar may also be regarded as the most important fact in his life. From the date of his settlement in Weimar he was subjected to influences which equally affected his character and his genius; had he continued to make his home in Frankfort, it is probable that, both as man and literary artist, he would have developed characteristics essentially different from those by which the world knows him. There were later experiences—notably his Italian journey and his intercourse with Schiller—which profoundly influenced him, but none of these experiences penetrated his being so permanently as the atmosphere of Weimar, which he daily breathed for more than half a century.

As Goethe himself has said, the first twenty-six years of his life are essentially the period of his "development." During that period we see him as he came from Nature's hand. His words, his actions have then a stamp of spontaneity which they gradually lost with advancing years as the result of his social and official relations in Weimar. He has told us that it was one of the painful conditions of his position there that it made impossible that frank and cordial relation with others which it was his nature to seek, and from which he had previously derived encouragement and stimulus; as a State official, he adds, he could be on easy terms with nobody without running the risk of a petition for some favour which he might or might not be able to confer.

For the portrayal of the youthful Goethe materials are even superabundant; of no other genius of the same order, indeed, have we a record comparable in fulness of detail for the same period of life. And it is this abundance of information and the extraordinary individuality to whom it relates that give specific interest to any study of Goethe's youth. From month to month, even at times from day to day, we can trace the growth of his character, of his opinions, of his genius. And the testimonies of his contemporaries are unanimous as to the unique impression he made upon them. "He will always remain to me one of the most extraordinary apparitions of my life," wrote one; and he expressed the opinion of all who had the discernment to appreciate originality of gifts and character. What they found unique in him was inspiration, passion, a zest of life, at a pressure that foreshadowed either a remarkable career or (at times his own dread) disaster.

It was said of Goethe in his latest years that the world would come to believe that there had been, not one, but many Goethes; and, as we follow him through the various stages of his youth, we receive the same impression. It results from this manifoldness of his nature that he defies every attempt to formulate his characteristics at any period of his life. In the present study of him the object has been to let his own words and actions speak for themselves; any conclusions that may be suggested, the reader will thus have it in his own power to check.

After Goethe's own writings, the works to which I have been chiefly indebted are Goethes Gespräche, Gesamtausgabe von Freiherrn v. Biedermann, Leipzig, 1909-11 (5 vols.), in which are collected references to Goethe by his contemporaries; and Der junge Goethe: Neue Ausgabe in sechs Bänden, besorgt von Max Morris, Leipzig, 1910-12, containing the literary and artistic productions of Goethe previous to his settlement in Weimar....